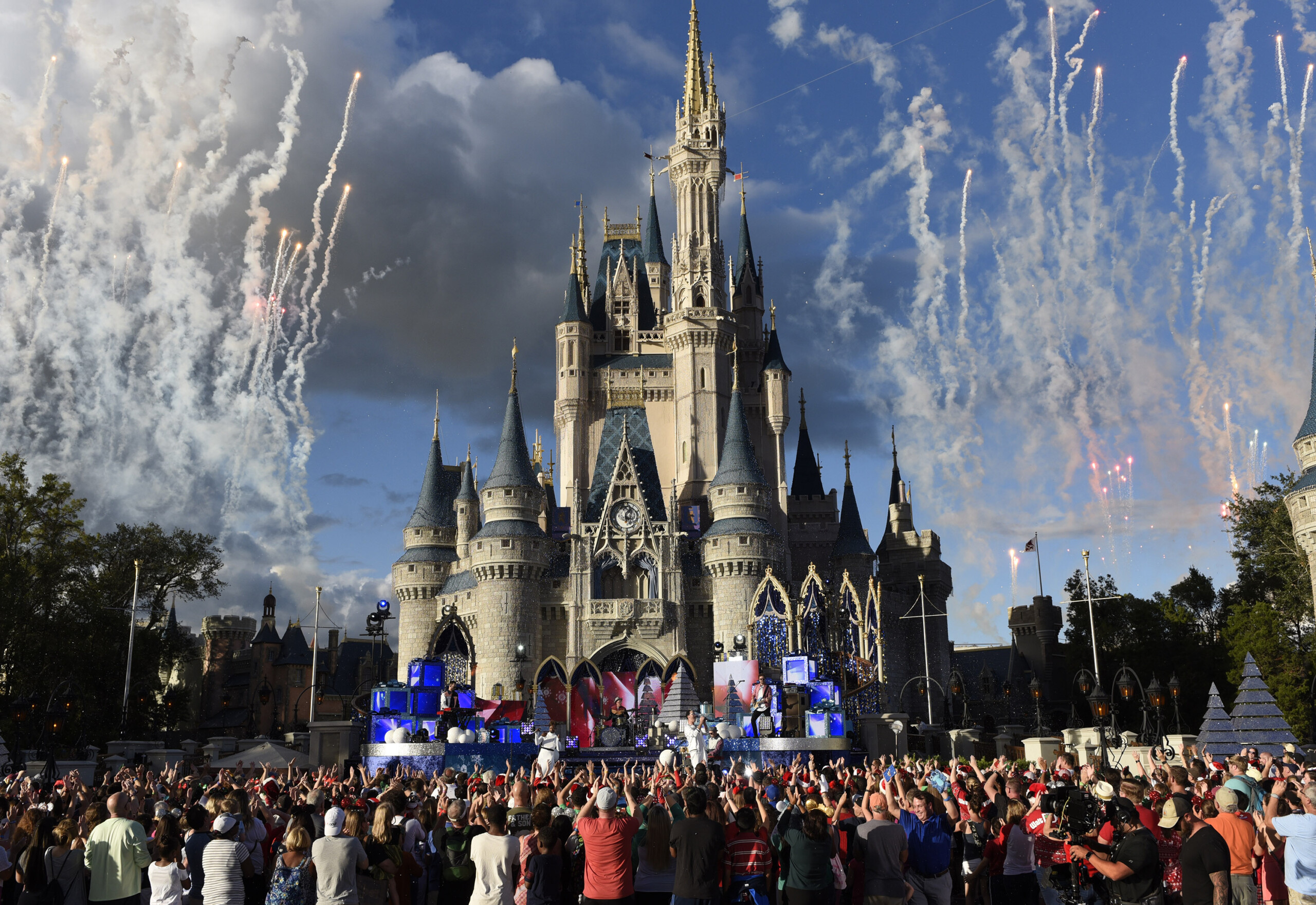 ABC has announced its slate of holiday programming, inviting families everywhere to cozy up on the couch under a warm blanket and get into the yuletide spirit with beloved classics and new favorites.

The network is celebrating the most wonderful time of the year with its holiday slate including a new iteration of the ratings superstar “The Disney Family Singalong” franchise featuring a festive new special, “The Disney Holiday Singalong,” on MONDAY, NOV. 30 (8:00-9:00 p.m.). 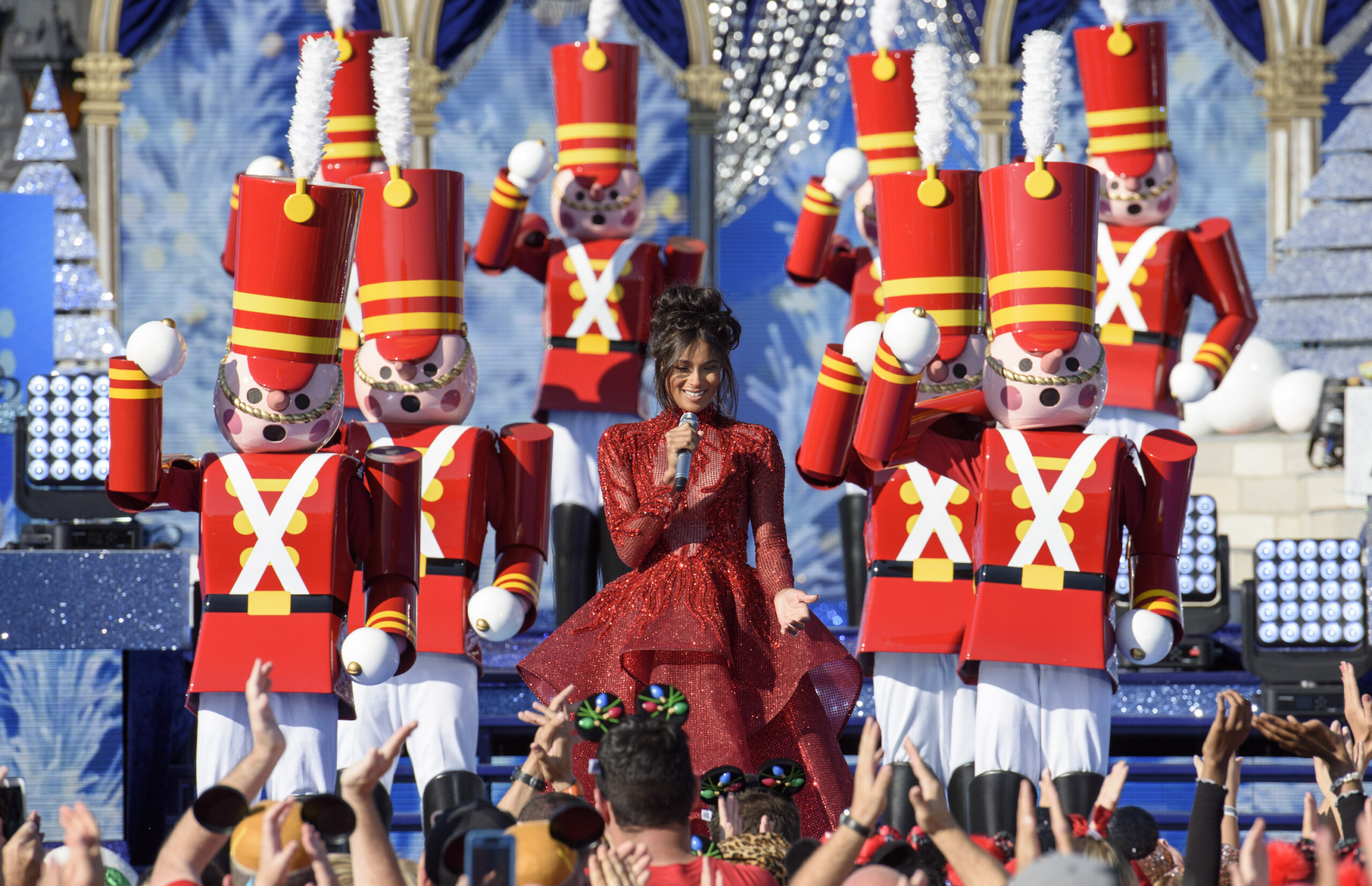 Additional highlights include a special fifth anniversary of the Thanksgiving evening staple “The Wonderful World of Disney: Magical Holiday Celebration”; a reimagined “Disney Parks Magical Christmas Day Celebration”; “CMA Country Christmas” from Nashville; a bright new season of “The Great Christmas Light Fight,” which received a new season order as well; new holiday-themed episodes of ABC comedies and “General Hospital”; and the network broadcast premiere of “The Greatest Showman.” Top it all off with a sprinkling of classic holiday favorites and settle in, ABC is about to get fa-la-la-mazing.

Additional movies, musicals and specials round out the holiday season on ABC. Airdates are as follows (all times listed are Eastern/Pacific).

“Olaf’s Frozen Adventure” – In “Olaf’s Frozen Adventure,” Olaf teams up with Sven on a merry mission. It’s the first holiday season since the gates reopened and Anna and Elsa host a celebration for all of Arendelle. When the townspeople unexpectedly leave early to enjoy their individual holiday customs, the sisters realize they have no family traditions of their own. So, Olaf sets out to comb the kingdom to bring home the best traditions and save Anna and Elsa’s “first Christmas in forever.” 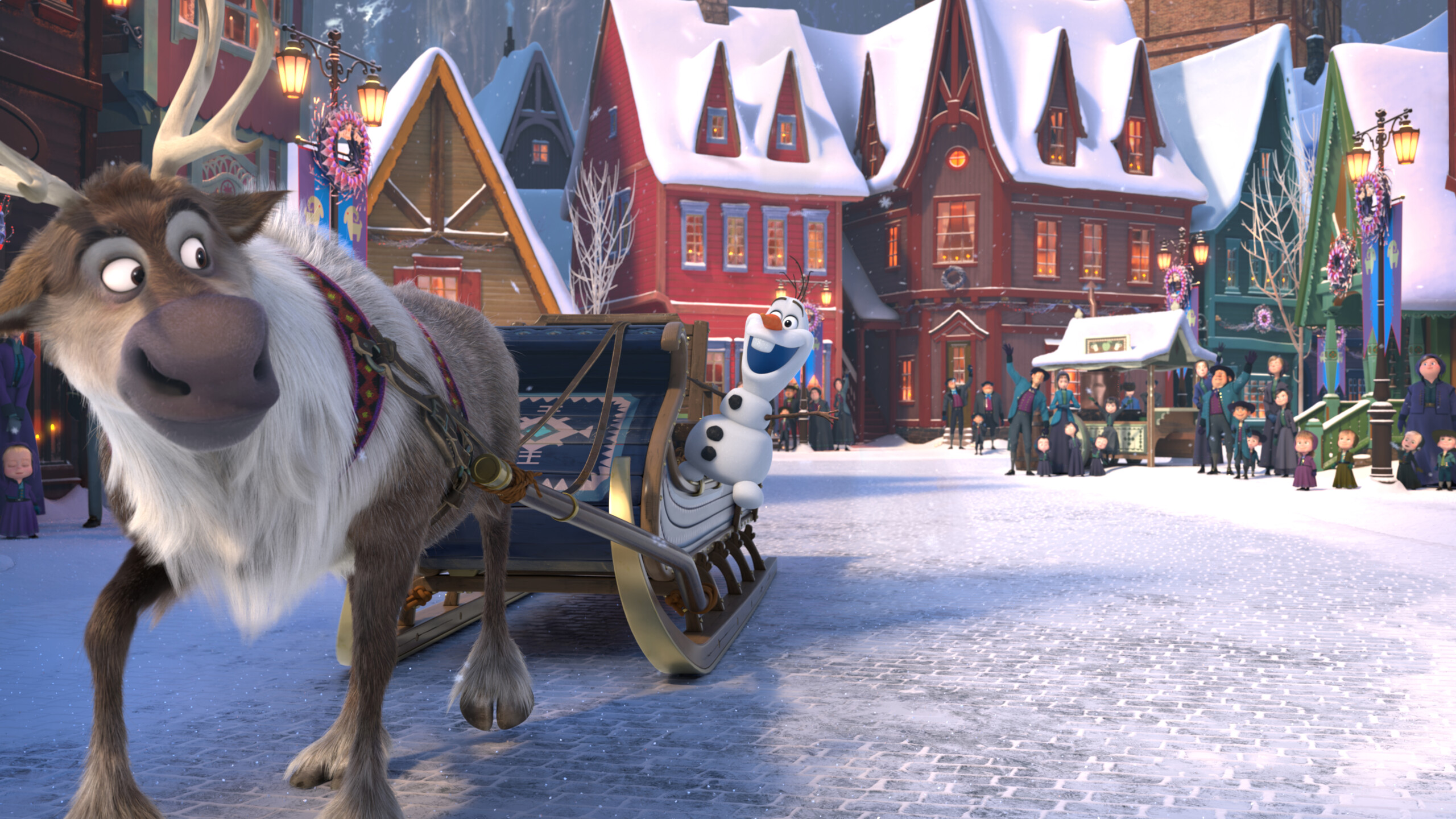 “The Wonderful World of Disney: Magical Holiday Celebration” – Kicking off the holiday season on ABC for its fifth consecutive year, this magical celebration on Thanksgiving night features a look back on spectacular celebrity musical performances among a flurry of Disney holiday entertainment. The holiday special is a collaboration by Disney Parks, ABC and Endeavor Content’s Film 45. (9:00-11:00 p.m.)

“Santa Claus Is Comin’ to Town” – In the perennial favorite created in 1970 by Rankin-Bass Productions (“Rudolph the Red-Nosed Reindeer,” “Frosty the Snowman”), Fred Astaire narrates this timeless tale of Kris Kringle (Mickey Rooney), a young boy with an immense desire to do good things for others. The vocal cast features Mickey Rooney as Kris Kringle; Keenan Wynn as Winter; Paul Frees as Burgermeister Meisterburger, Grimsby, the soldiers and the townsmen; Joan Gardner as Tanta Kringle; Robie Lester as Jessica and Andrea Sacino; Dina Lynn, Gary White and Greg Thomas as the children. (8:00-9:01 p.m.)

“Disney Prep & Landing” – Walt Disney Animation Studios brings you a half-hour holiday special tale of an elite unit of elves known as Prep & Landing. After working tirelessly on Prep & Landing for 227 years, an elf named Wayne is upset when he doesn’t receive an expected promotion to be the Director of Naughty List Intelligence. Instead, Magee, the North Pole Christmas Eve Command Center Coordinator (NPCECCC for short), partners Wayne with Lanny, an idealistic rookie who has an undying enthusiasm for Christmas.

During their Christmas Eve mission, Wayne and Lanny encounter unexpected challenges that push them to their limits. Will the elves be able to guide Dasher, Dancer and the rest of the reindeer pulling Santa’s sleigh through a raging snowstorm to ensure a merry Christmas for all? (7:00-7:30 p.m.) 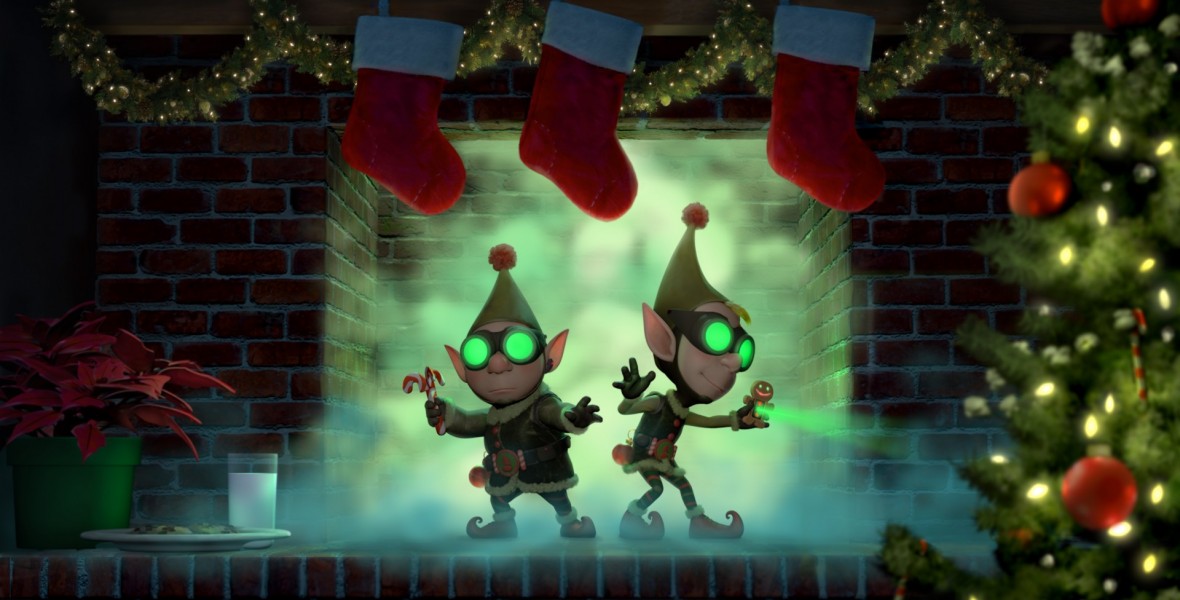 “Disney Prep & Landing 2: Naughty vs. Nice” – The yuletide adventures of Christmas elves Lanny and Wayne continue. With the Big 2-5 fast approaching, Wayne and Lanny must race to recover classified North Pole technology that has fallen into the hands of a computer-hacking Naughty Kid! Desperate to prevent Christmas from descending into chaos, Wayne seeks out the foremost Naughty Kid expert to aid in the mission, a bombastic member of the Coal Elf Brigade who also happens to be his estranged brother, Noel. (7:30-8:00 p.m.)

“General Hospital” – Chasing tradition and relishing in the fact that she has unusually unfettered access to the Quartermaine kitchen, Olivia strives to create the perfect traditional Thanksgiving feast for the family and their guests. Meanwhile, Sam and Carly’s mutual contempt fades to an unlikely moment of friendship as they discuss the paths their lives have taken supporting those they love.

Brando gives Sasha the support she needs, while Ava wonders if her aspirations of having a happy family can be salvaged. Monica reminds everyone just how much they have to be thankful for in the face of the challenges they’ve encountered, and the arrival of an unexpected guest proves to be the pleasant surprise everyone needs to experience the joy of the holiday. (2:00-3:00 p.m., check local listings)

In its April debut, “The Disney Family Singalong” premiered as TV’s highest-rated show among Adults 18-49 (3.4/16) on any network on any night since ABC’s broadcast of “The Oscars®” in February. Performers and additional details will be announced at a later date. Executive producers include Done+Dusted’s Hamish Hamilton, Katy Mullan, Raj Kapoor, Patrizia Di Maria, Nick Florez and RJ Durell. (8:00-9:00 p.m.)

“The Goldbergs” – “Hanukkah On The Seas” – Pop-Pop surprises the family with an ill-advised winter cruise to Canada. Meanwhile, Erica stirs up holiday trouble at home on an all-new Hanukkah-themed episode. (8:00-8:30 p.m.)

“black-ish” – “Compton Around the Christmas Tree” – Dre realizes he’s out of touch with his roots after Junior claims he’s turned into a “valley dad,” so he takes the family to his hometown of Compton. Meanwhile, Bow tries to teach Jack and Diane about the spirit of giving by having them volunteer in Compton for Christmas on “black-ish.” (9:30-10:00 p.m.)

“The Great Christmas Light Fight” – Season Premiere – It’s beginning to look a lot like Christmas as ABC’s tree-mendously popular decorating competition series, “The Great Christmas Light Fight,” takes over Wednesdays in December as it returns for its eighth season with back-to-back episodes. America’s brightest houses bring joy to the world with the help of celebrity judges – lifestyle expert Carter Oosterhouse and famed interior designer Taniya Nayak. All isn’t always calm, but all is definitely bright as the Christmas classic takes viewers across the country to the most elaborate and awe-inspiring holiday displays in the nation. 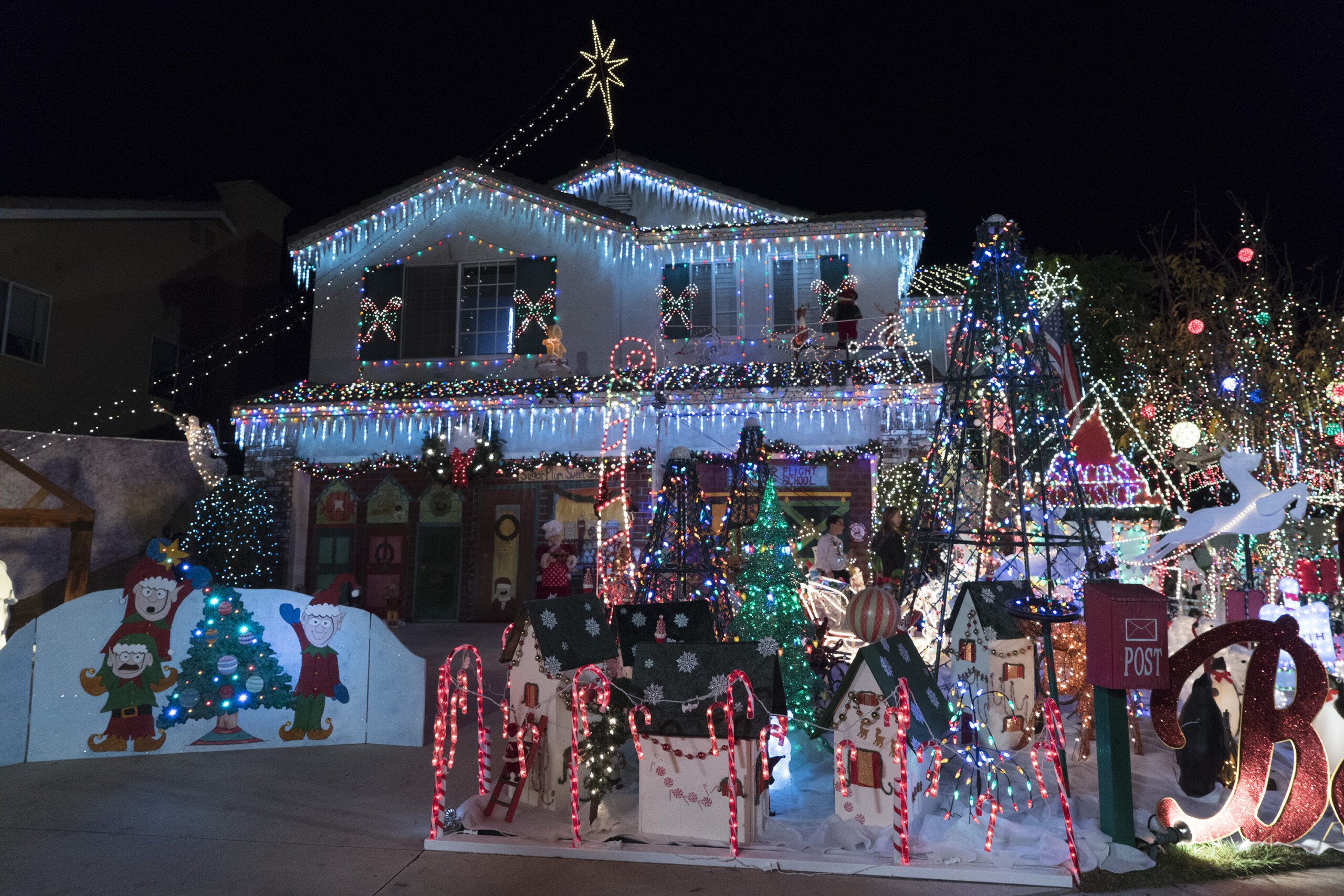 This holiday season, we will once again see four fantastic families face off in each one-hour episode and compete to win $50,000 should they “sleigh” the competition. Taking Christmas decorating to another level, the Heavyweights special will return for its third year featuring the first-ever parade of one-of-a-kind sparkling floats and a mile-long drive-through with over a million synchronized lights, to name a few, that viewers will never forget. “The Great Christmas Light Fight,” which also received a season nine pickup, is produced by Fremantle. Brady Connell, Max Swedlow, Felicia Aaron White and Jennifer Mullin are executive producers for the series. (8:00-10:00 p.m.)

“Shrek the Halls” – DreamWorks Animation’s “Shrek the Halls,” a half-hour of entertainment starring America’s favorite ogre and his friends, features the voices of Mike Myers, Eddie Murphy, Cameron Diaz and Antonio Banderas. Just when Shrek thought he could finally sit back, relax and enjoy his happily ever after with his new family, the most joyous of all holidays arrives.

It’s Christmas Eve and everyone is filled with holiday cheer – except for Shrek. He isn’t exactly the picture of yuletide joy, but for the sake of Fiona and the kids, he tries to get into the spirit of things as only an ogre can. Unfortunately, everyone seems to have their own ideas about what Christmas is all about, so when Donkey, Puss In Boots, Gingerbread Man and the whole gang try to join in on the fun, Shrek’s plans for a cozy family celebration end up spiraling into one truly unforgettable Christmas. (8:30-9:01 p.m.)

“General Hospital” – As holiday celebrations begin in Port Charles, Carly and Jason return to Sonny’s house to find that in her absence Michael and Joss have stepped up and added all the finishing traditional touches for a beautiful multigenerational family Christmas at home. The holidays make various losses felt in new ways, and Maxie looks to honor someone who can’t be with them. Consequences from past decisions are coming to bear – and several of our PC residents hope for the best but fear the worst. However, the holidays also provide opportunities for heart-to-heart talks, forgiveness, unexpected connections and long-awaited reunions. (2:00-3:00 p.m., check local listings)

“The Greatest Showman”– Network Broadcast Premiere – An original musical inspired by the life of P.T. Barnum, starring Hugh Jackman. Barnum was a visionary who rose from nothing to create the “Greatest Show on Earth,” a spectacle and celebration of his larger-than-life imagination that captivated audiences around the globe. (8:00-10:00 p.m.)