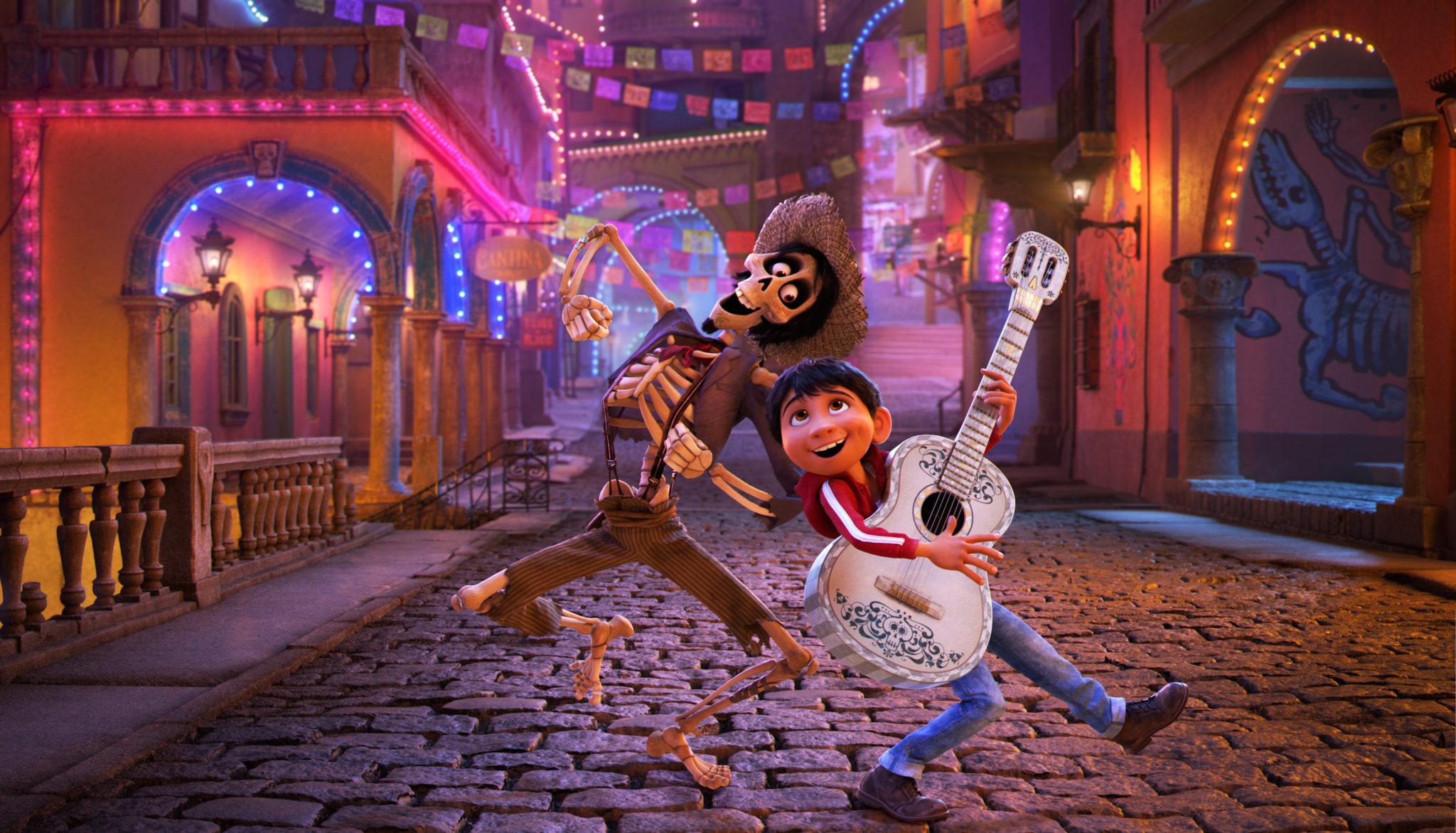 It’s long past due for Disney, Pixar and other film production companies to tap into cultural myths beyond those common in Eurocentric storytelling. Moana built upon it beautifully. Now Mexican culture gets a healthy dose of its own with Coco.

Young Mexican Miguel wants to pursue the life of a musician, isolating himself often to practice his guitar stringing. When Miguel’s family consistently negates his desire to chase his dreams, an act of selfishness sends him through to the Land of the Dead. A journey that redefines what Miguel chases in life, the young boy must reconnect with his deceased family members all the while trying to prove he can play music.

A few problems persist with the opening of the film’s narrative. Young Miguel wants to play music but his family, and specifically his abuelita (grandmother) want him to have no part of that. The sordid past isn’t fully fleshed out until later, a fine storytelling device, but the decision to make the family so adamantly against the idea of music itself is a little too hollow. The opening 15-20 minutes of storytelling – a boy chasing his “destiny” – left me concerned it may have been misguided, only using the holiday as “exotic” set dressing to accompany the film. The journey Miguel takes to play music also beckons a cognitive dissonance in how the story materializes. There is no immediate correlation to Miguel’s desire to play music and familial struggle. But something happens to Coco when Miguel winds up in the Land of the Dead. A bridge of flowers, blacklight creature designs, sugar skulls galore and a genuine appreciation for a life long after death. I won’t divulge how Coco does it, and the opening does still stumble in its execution, but the melding of song, history and family perfectly encapsulates the very idea of Dia de los Muertos.

As a Mexican writer, it warms my heart to see our celebrations and traditions brought to life with such astounding visual panache. Dia de los Muertos is about celebrating life after death for those we’ve lost, while also remembering their lives on this plane of existence. Often in media, my country is portrayed with only dirt roads and pavement. There are never attempts to truly capture the beauty enriching the culture or its people. Life is vibrant, colorful and bombastic and rarely more so than on the celebration of Dia de los Muertos. As as are the supporting characters, all of whom feel fleshed out in their own way with purpose or at the very least a fascinating visual design.

The incorporation of music is ultimately vital to the story and its representations. A score by Michael Giacchino accentuates necessary components but original songs by Germaine Franco and Adrian Molina drive a purposeful beauty to the world. This is a story of Mexican culture by focusing on our most marketable holiday. If a corporate decision like this had to be made, it’s at least filled with wonder and treated with respect. It’s the least they could do. Them going the extra mile just gives it that extra push.

Also appreciated is the consistent Spanglish delivered from the characters. There are no subtitles for anybody not understanding the shifting tongues of people talking in the film. It merely is a fabric of the universe, as it is our own. It relegates an authenticity to my people who often do not get a time to shine in the spotlight. An entirely Mexican cast do wondrous voice work here, never delegating us to stereotypes or cardboard cutouts.

There is a sense of history in the world and its characters. Miguel’s journey isn’t strictly about disregarding family to pursue his dream (lest he suffer the wrath of the chancla). The journey in Coco is, at its core, coming to terms with the foundations of family, history and one’s place within it. You can’t build a future without learning of and from the past. The present brings all threads together as they forge onward to a unified future.

There are minor instances in regards to the plot driven aspects of images and photos though those seem like narrative restructuring than anything entirely world breaking. Nonetheless, this movie will be on constant plays throughout Mexican households and it warrants every single viewing. If anything, Coco plays in a visual sandbox where character, theme and emotion triumph over nitpicking any plot logic. Emotion, history and death don’t make much sense anyways. It’s exactly how it should be.