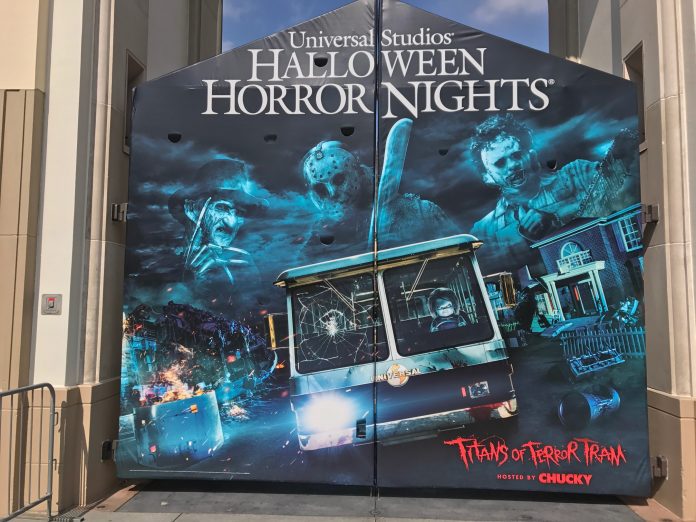 Halloween Horror Nights at Universal Studios Hollywood returns for another year with new terrors expecting you in the dark. The Shining, being one of eight mazes you can experience, brings the world of films to life right before your eyes. This year has three brand-new original scare zones, seven new mazes, a new Terror Tram and the return of the Jabbawockeez. Let’s begin with the mazes!

Before I fully start each maze review, I will tell you that there is a HUGE amount of unnecessary black walls. And within those black walls is long, lonely walks of no theming or scare-actors/scares. It was incredibly disappointing knowing that a movie studio park is trying to pass by with black walls. Insidious gets a pass because you are walking through the Further. But Saw, which has you walking through a warehouse and seeing multiple black walls when you could make it look like you’re walking through a warehouse is a huge turn off. Even if you put monsters in those black hallways, it’d be better than nothing. These reviews will try and have as little spoilers as possible.

Saw: The Games of Jigsaw

This maze was a mixed bag of good and bad. The good was that they had really great scenes with traps from all of our favorite Saw movies, but the bad was that there was too many black walls and some of the Jigsaws didn’t time their scares that well. The reverse beartrap actors did an amazing job at bringing that scene to life, but there were some scenes like the barbwire chain-link victim just wasn’t selling it to make me believe that he was really in danger or in trouble. There is another scene that will be in the new Jigsaw movie where the victims have buckets on their heads being pulled towards a buzzsaw wall and there’s one actress in there, but she just wasn’t making me buy that she was in danger. My biggest gripe of this whole maze was the fact that there were way too many black walls. You have us walking through a warehouse where jigsaw has all these traps going on, but the black walls just pull me out of being immersed. Also, I would The Saw theme to play through out the maze to build up the suspense.

Insidious: Beyond the Further

Insidious was probably the best maze, scare wise, at the event. The maze has mostly to do with insidious the last chapter, but it’s hard to follow along since the movie is not out yet. They do have different sections of the maze that are dedicated to insidious chapters 1, 2 and 3, but they seem minuscule compared to the amount that Insidious 4 has. You come face-to-face with keyface, the lipstick demon, the bride in black, the man who can’t breathe, and the bride in black’s mother. This scares were beyond terrifying and the sets they had were really well done, but it felt like a maze have more black walls than anything else. This is the only maze that I will allow black walls because the further is a dark place, but I still wish more theming was put into it. This is still one of the highlight mazes at the event.

Oh, Ashy Slashy. How I have a love/hate relationship with you. When I see the words “vs.” for HHN Hollywood, I picture being surrounded by Ash and the undead, but it felt like Hollywood was trying to take a page out of Orlando’s book by having the fights be acted out on the sides of you. I didn’t care for that; I wanted some full blown Alien vs. Predator or Freddy vs. Jason where Ash and the Evil Dead fight on either side of me while I’m walking through the middle of them. They did that once with the finale monster and I loved it. Again, black walls galore and it’s annoying seeing so many with hanging vines and no scare actors.  We see Pablo once in the maze with the book on his face, but it was too dark to really see who or what he was doing, especially for someone who doesn’t watch the show. The sets that they did have for the maze look fantastic with entering ashes house to entering the evil dead barn. Those were some really “wow!” moments, but those dang black walls kill it for me.

The Horrors of Blumhouse

The Horrors of Blumhouse was definitely a cool experience with getting to walk through three of Blumhouse’s movies which include The Purge, Happy Death Day and Sinister. You start off in The Purge by walking through a chain-link maze filled with beat up cars, purgers and random props. You then head into an abandoned movie theater which is featuring Happy Death Day and Sinister. You first start off in Happy Death Day where you enter the dorm room of the main character while she’s laying in bed and you then go through the dorm hallway where the slasher is waiting for you around almost every corner . Once you make it out of the hallway you’ll end up back into the dorm room where the girl is laying in bed again, but the slasher will pop out at you through a window. You then end up in a construction site and finish in a party that holds multiple costumed dummies and people dressed as the slasher. After the party you will end up in Sinister where are you experiencing different scenes from Sinister one and two. The demon is the major scare in this portion of the maze and the best scare comes from watching a home-video on a screen. The problem with Sinister was again there was a lot of black hallways, but at least they filled the black hallways with monsters to compensate for it.

One of the most detailed mazes, but still black wall problems, when they could have just painted them the color of the hotel. I was the most skeptical of this maze because I don’t think human portrayals are all that scary. But this maze blew me out of the water! The axe scene where he’s hacking through the door was incredible and it had every character that played a vital role in the movie and this was definitely a solid maze. And now I ask about black walls, what were the point of them in this maze. Am I walking through Jack’s black, dull mind? Because if that is the case, it makes no sense and no one will understand it. It worked for The Exorcist, but not here.

This maze was a little confusing at first, but then I realized we are walking through a tv show that a horror fan is watching. You start in A Nightmare on Elm Street and the sets were really great in here with walking through Freddy Krueger’s Nightmare lair. We then enter Friday the 13th with Jason Vorhees as we walk through a forest then into bus that leads to his home. The last is The Texas Chainsaw Massacre, this one had me a little confused on what we were walking through, but it looked like a warehouse where Leatherface and Chop Top take care of their victims. The maze seems pretty short, but sweet. The transitions from one slasher to the next was great and the scares were spot on!

Easily the most detailed maze this year. There are black walls in this maze, but there were very little and that’s how the mazes should be. Piggy Man, The Butcher, The Chens and everyone involved were absolutely incredible with top notch scares. Walking through the Roanoke house was terrifying and completely immersive with iconic rooms and scenes from the tv show such as the “murder” wall, hillbilly shack, moving tongues, and many others.

There was literally no changes to this day-time maze for Halloween Horror Nights. No additional monsters or anything like in 2016. I like this maze, but bring some extra life to this maze during Horror Nights, Universal!

So with a new theme in the tunnel this year, my expectations were higher than usual. The creatures and mutants did an incredible job with what they had to work with and they looked terrifying, but it was the same flashy headache lighting and dubstep music like last year with The Purge! I would have loved a couple of fog machines and green lighting to make it seem like we’re in an actual “Toxic Tunnel”.

This “scare zone” is down in the metro sets and it was more of a gauntlet style walk through where you can only walk one direction, than an actual scare zone. I liked the theme of this one a lot with demonic and cult style monsters running around. The awkward thing were the “victims” running around. A lot of guests didn’t understand who they were and were confused on why park guests were scaring them even though they are scare actors.

The best and only actual scare zone where you can walk any direction you want! This is located at the main entrance and the monsters were all things you find with a classic Halloween house. You get your pumpkins, werewolf, skeletons and sheet ghosts. This was a lot of fun to walk through and you can sit around and enjoy others getting scared!

This was by far the worst Terror Tram I ever experienced. The beginning with Chucky and then heading through Bates More with Jason Vorhees was great, but then you get to a single hallway near the Bates house with 4 Leatherfaces on your left and chop top, grandpa and the dad on the right scaring over the walls. Why were all the Leather faces on one side? This was extremely sloppy execution. War of the Worlds was Freddy Krueger and there are multiple of him dressed as himself, firemen, paramedic, soldiers and even a grandma. This was the best portion of the Terror Tram until you’re stopped for minutes upon minutes just trying to move through another ho hum section for Leatherface which you’re supposed to be in a meat warehouse. Last year with Hollywood Harry was fantastic with the two seperate paths and the container maze in the war of the worlds section and I wish they would have done a version of that again.

I unfortunately didn’t get to see the show this year, but the Jabbawockeez have never been a disappointment to the crowds that see them. Their dancing is incredible and if you’re into that kind of thing, I would recommend checking them out!

So that concludes my review! The mazes were great this year, but those black walls were just major a major buzzkill, especially when you have no scares going on in them. If you’re going to charge people 50 plus dollars to attend this event, there should be no excuse for black walls. I did love the event as a whole, but there was much much room for improvement and I hope they get them fixed.