As the boat glided across Lake Constance, a 7th-century castle appeared through the morning mist, her fortified walls jetting from the side of an ancient cliff. Below the fortress a village of half-timber structures and fertile vineyards climbed a hillside, exposing a colorful medieval town.

This is how sailors saw Meersburg centuries ago. This is how I discovered the tiny German village last spring.

My getaway began by climbing a flight of ancient stairs to the upper part of the city, known as Oberstadt. Here I found a pedestrian-only town of meandering cobblestone streets and colorful buildings hidden above the lake.

My first stop was Hotel 3 Stuben (www.3stuben.de) a historic, half-timbered house located on the edge of old town, near the oldest inhabited castle in Germany (“Old Castle”) as well as the famous Baroque Neues Schloss (“New Castle”). The hotel consists of 28 rooms individually decorated with character and style true to its 16th-century roots. And while the décor is whimsically historic, the amenities are all modern and efficient.

At the hotel, I checked into a charming top floor room with a pitched ceiling, comfy twin bed, large TV, work station, sofa and chairs, minibar, bathroom with shower, and big windows looking over the city.

With home base taken care of I went exploring, starting with the Old Castle. Located on a ridge overlooking Lake Constance, Meersburg Castle was built sometime in the 7th century to protect city dwellers from invaders. Today it is both a public museum and a private residence.

To enter the giant fortress, I crossed a draw bridge and was instantly transported back to the Middle Ages, where I encountered medieval living areas; Knight’s armor and weaponry such as lances, swords and battle-axes; and a creepy castle dungeon, in which prisoners were lowered to their doom. The torture chamber in the deep castle dungeon offers insight into medieval justice. Guests visiting the castle can see more than 35 furnished rooms, including the “dirnitz” or great hall, the castle kitchen, and the well chamber. There is also a bathhouse and bakery.

The castle tour also includes the rooms in which famous German poet, Annette von Droste-Hülshoff, lived when she visited Lake Constance until her death in May 1848. The castle café with its magnificent panoramic terrace and the romantically situated castle tavern by the Marienbrunnen fountain offer great views of Lake Constance.

From the castle, I strolled past pubs, gift shops, eateries and museums. One of the most interesting museums is dedicated to wine and features old-school wine making tools, such as a mammoth wooden grape crusher and wine barrel.

My next stop was the banks of Lake Constance, where I found a public swimming area teaming with locals taking advantage of precious spring sun. While soaking, I admired a spectacular view of the Swiss Alps in the distance and the island of Mainau a few miles offshore.

Also known as Flower Island, Mainau (www.mainau.de) is a short ferry ride from Meersburg and makes a perfect day trip. The island is a giant garden full of roses, palms, bamboo, hibiscus, tulips, orchids, Sequoia trees, and more. There is also a butterfly house and a restaurant.

In the morning, I shuttled to Friedrichshaven and visited the Zeppelin Museum (www.zeppelin-museum.de), the world’s largest airship museum. The museum features thousands of historical items on the history of Zeppelin airships and is highlighted by a 40-meter-long reconstruction of the Hindenburg and artifacts from the airship’s fiery last voyage. Visitors can climb a ladder onto the legendary passenger ship, rebuilt according to its original dimensions, to get an eerie feeling of what it would feel like to be a passenger on this innovative, luxury airliner.

To get back to Meersburg, I biked 11 gorgeous miles through lush lakefront vineyards, picturesque hamlets and green parks. I concluded my evening in Meersburg with traditional German cuisine and local wine at Winzerstube zum Becher restaurant in the center of town.

For more info on visiting Meersburg, go to: www.meersburg.de or www.germany.travel. For info on flying there, visit Swiss International Air Lines (SWISS) at: www.swiss.com 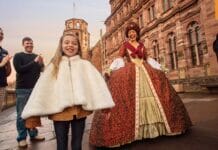 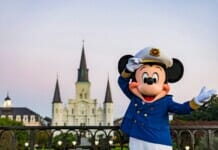