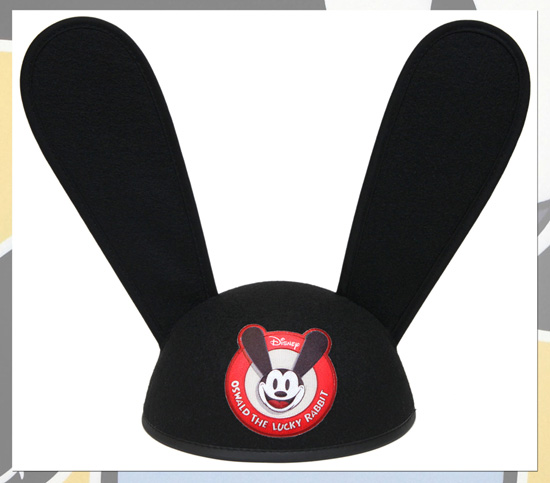 As my fellow author Jennifer Fickley-Baker recently shared, this week marks the debut of Oswald the Lucky Rabbit. At Disney Theme Park Merchandise, we’ve introduced a variety of Oswald merchandise this past year in honor of his 85th anniversary. Being a fan of Walt Disney Company history, I find it wonderful to see so many new items featuring this classic character. Here is a quick look at some of the Oswald merchandise.

One of the more celebrated (and highly desired) items created this year was an Oswald hat. The hat was created for our partners with Disney Interactive Studios to celebrate the upcoming release of Disney Epic Mickey 2: The Power of Two on November 18. The hats were distributed at the Electronic Entertainment Expo and at San Diego Comic Con this past summer. I’m happy to report a Disney Parks version will be released in late October/early November. The hat features a different Oswald logo than the previous hat but is still just as awesome (I intend to wear it while playing the game). 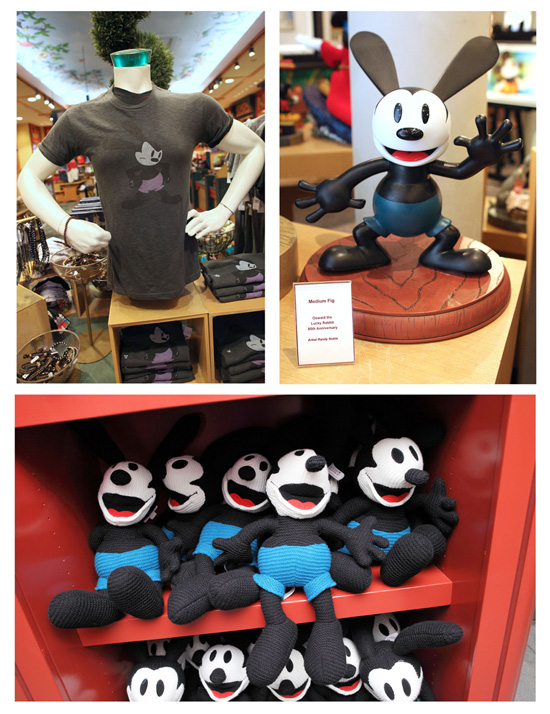 This past summer also saw the opening of Oswald’s on Buena Vista Street at Disney California Adventure park. This new location contains a variety of “road trip essentials” including autograph books, hats, bag and more. During a recent visit to the park, I spotted the amazing vintage-inspired knitted Oswald plush. Denise Edelmaier, product developer for plush, said that the knitted plush was in development for about three years as they finally found a way to make the plush extra soft (early versions were too coarse).

Oswald also found his way onto a popular men’s tee-shirt and a collectible big figurine (or “big fig” as we sometimes call it) designed by Disney Design Group artist Randy Noble. 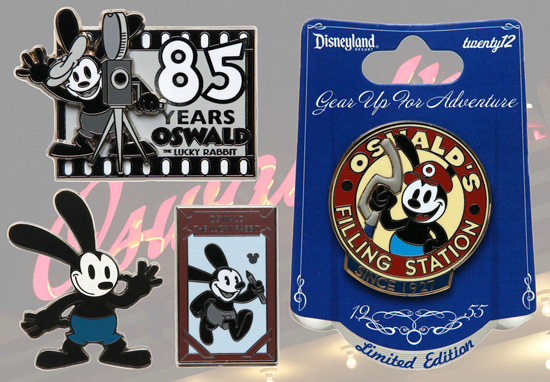 Disney pins started celebrating Oswald in January by releasing an 85th anniversary pin. We also released an open-edition pin, a limited-edition pin and a Hidden Mickey pin for Disneyland Resort. Look for another open-edition pin next spring.

But one of my favorite items (besides the hat) will be a new 3-inch Vinylmation figure from the Classic Collection series designed by Disney artist Eric Caszatt. Planned for release in early November, Oswald will be the mystery chaser figure. I know, it’s a spoiler but I couldn’t resist – the figure looks great!

Socalthrills Staff - January 20, 2023
To commemorate the 100th anniversary of Disney (Disney100), Post Consumer Brands is participating in the Disney 100 Years of Wonder celebration with the launch...

Logo, contents, and media copyright Socalthrills.com unless otherwise noted. All rights reserved. Socalthrills.com is not endorsed by or affiliated with the Walt Disney Company, or its subsidiaries. By using this website you agree to the terms of use.
Copyright © 2022 RKB Creative.