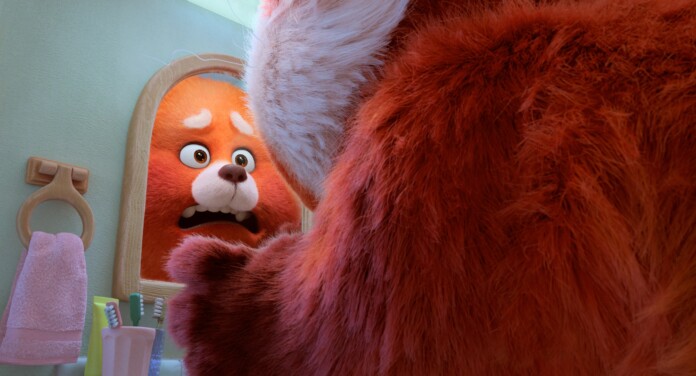 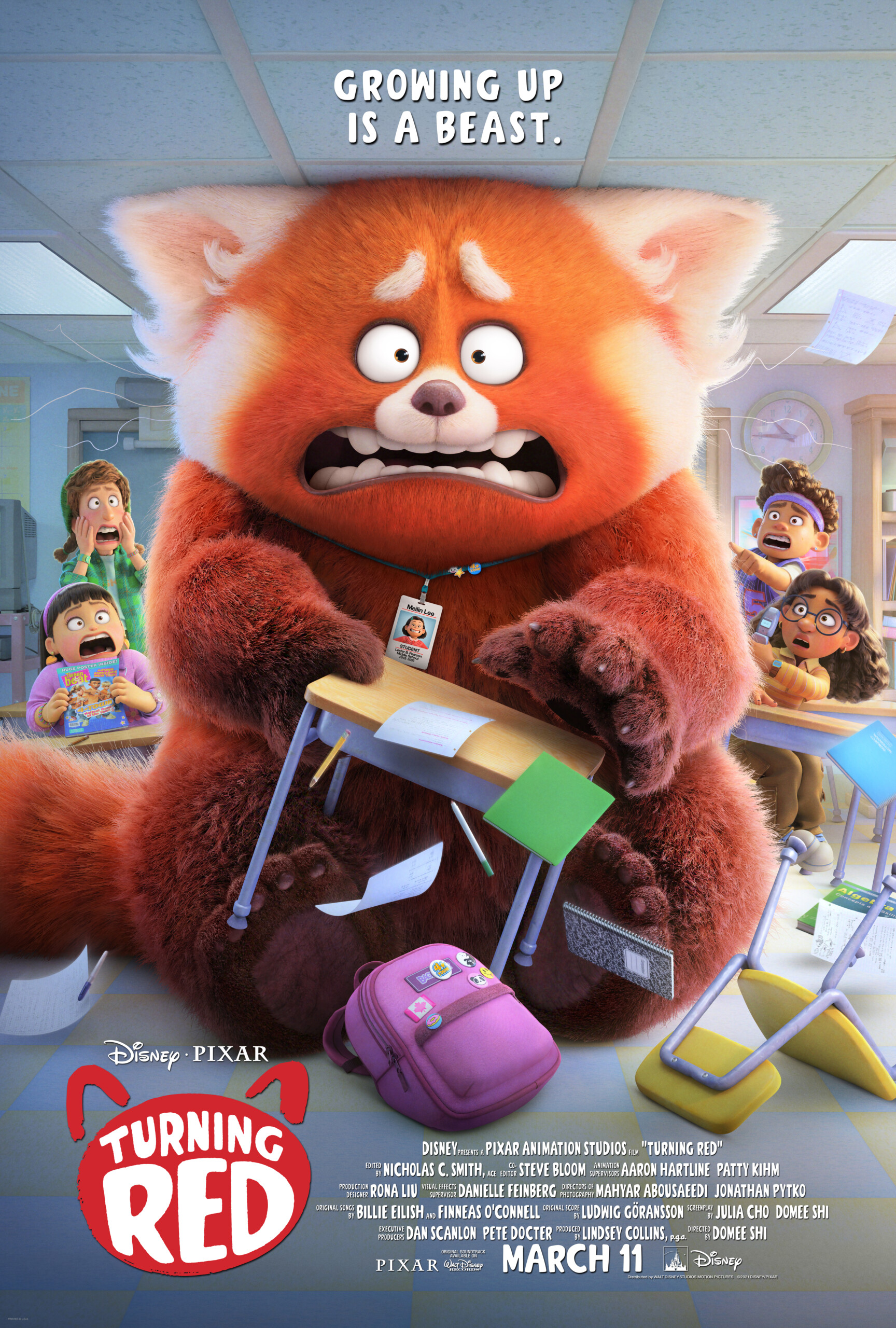 In Turning Red, we meet 13-year-old Mei Lee whose carefully constructed life of dutiful daughter to her overbearing mother Ming comes completely undone with the advent of puberty.  In addition to the typical changes which come to her interests, body, and relationships, Mei gets an extra level of difficulty when her emotional volatility starts manifesting as a transformation into a giant red panda.

As Mei learns what it means to grow older and decides what sort of adult she wants to be, she must do it while navigating by a mother who refuses to let anything change the tight relationship they have in place, and the rising passions of the teen heart that gives preference to her friends, freedom, and 4-Town. 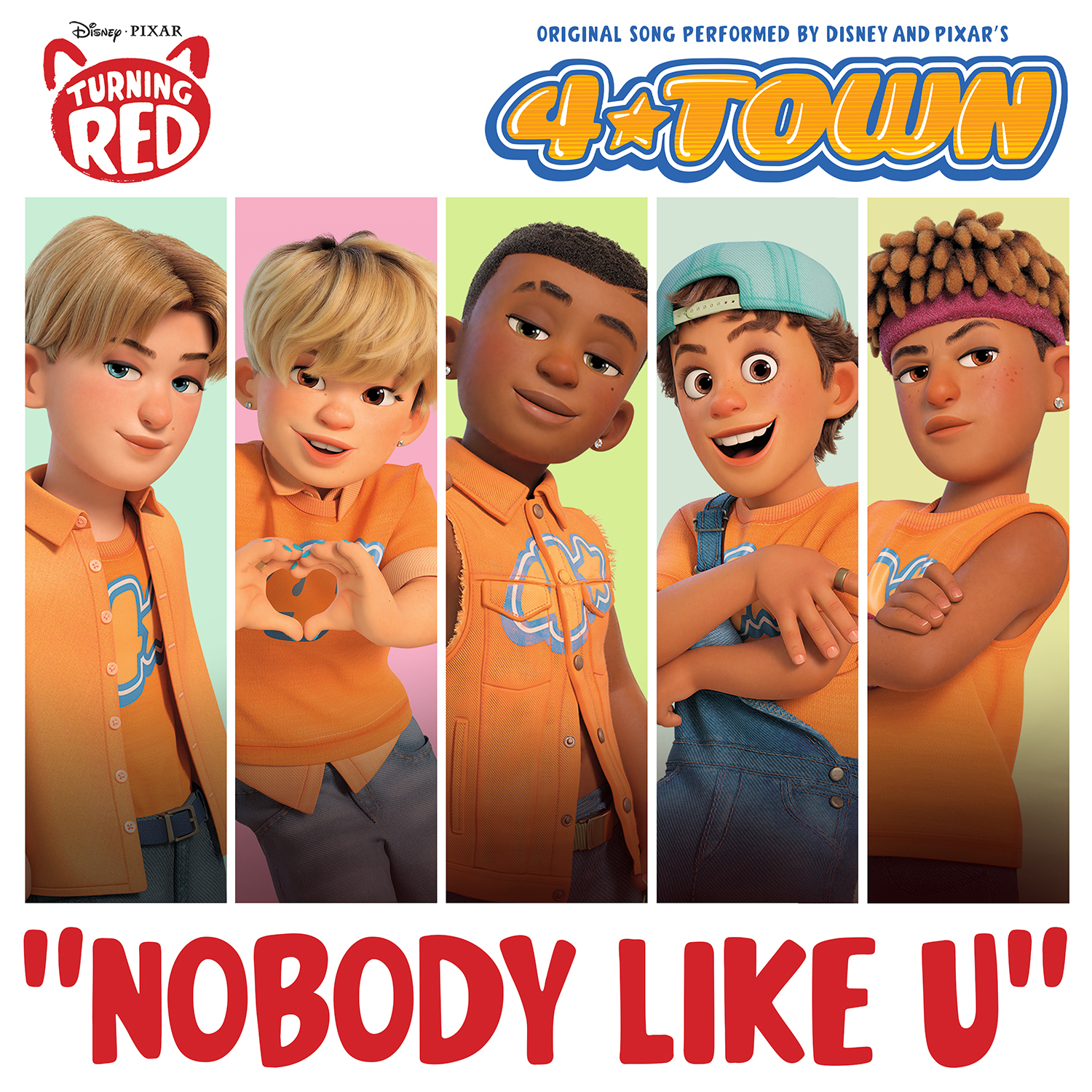 To discuss the making of Turning Red, some of the filmmakers met for a virtual press conference to talk about the characters, tiger moms, and puberty.  The first half was made up of voice talent Sandra (Ming) Oh, Rosalie (Mei) Chiang, Ava (Miriam) Morse, Maitreyi (Priya) Ramakrishnan, and Hyein (Abby) Park while the second half featured director Domee Shi, producer Lindsey Collins, and screenwriter Julia Cho.

Morse:  “Miriam is the best friend that you could ever want. She’s funny, she’s always there for you, she’s a party animal, and she just always knows how to cheer you up when you’re down.”

Ramakrishnan:  “Priya is pretty sarcastic, dry, very deadpan…but you know what?  She’s really cool.  I think she’s one cool cat.  And, yeah, she’s always down to clown, but always with a cool attitude.”

Park:  “Abby’s like this little ball of energy–very loving.  Very passionate, but comes up a little too explosive at some times.  I would say she loves her friends so much, especially when they’re fluffy.”

Oh:  “I play Ming, Mei’s mother, who is…I’d like to call her a hypervigilant, loving mother.  We basically go through this change in our relationship…a natural change between mothers and daughters when daughters have to become their own independent people.”

Chang:  “I voice Meilin Lee.  She is a 13-year-old Chinese Canadian who’s confident, ambitious, a little dorky, and a bit of an overachiever.  In this movie, she goes through these huge changes and she’s dealing with this, but at the same time, she doesn’t want to lose herself…as well.”

Park:  “…Because I’m a story artist at Pixar too…it is actually very important.  When we finally got the chance to make this female friendship, it was very important that it was authentic.  So, Domee talked a lot about her own experiences with her friendships, and how she would hate to add on to those tropes…So we actually shared a lot of different stories of the moments that we love in terms of female friendship.  Then she actually asked a lot of different people within the studios too, to get a really, authentic insight on how girlfriends are.”

Oh:  “I’m just gonna jump in.  I think that question is extremely important, because, having young women and young girls in my life, watching television and films with them over the years, you just realize I don’t know who sets this up that girls are like this.  Because I don’t think it’s very true…I think this is an extremely good representation of deep friendships, and the highs and the lows.”

Ramakrishnan:  “Yeah, but also on that, I think with TV and film, we always portray that your love interest is the one that you should be closer with.  You know, like, that’s, the real bond.  That always made me sort of skeptical, because wouldn’t the childhood best friend know you better?”

Oh:  “…I’m also not afraid of that concept of tiger mom.  I mean, I love my mom, and she’s a fierce, fierce person.  Tiny.  Tiny, but fierce.  You know, I actually do have something that I posted a very long time ago on Instagram because it was such an unbelievable quote that my mom said in the kitchen.  I had to write it down on a  Post-It, and then I put it up on Instagram.  Basically, she said (I’m not joking) ‘If only you were neater, I would love you more.’

“I happen to have a really good relationship with my mom, and I know not everyone does, but I do, and…I can’t stop her from being herself and I’m not gonna stop her, and I’m gonna enjoy her…So–I’m not gonna do what she wants me to do because that’s just not me, but there, within that is that pull that we are always having, I think, with our mothers and with our Asian mothers that it’s very, very difficult to satisfy them.”

Collins:  “There’s a lot of ’em in there.  I mean, there’s all the standards…

Collins:  “You know, we have a Luxo ball in there, we have A113 in there…I don’t wanna spoil all of ’em, ’cause I mean…you gotta watch it.  We have a couple in there that are super fun, though, that are from the Spark Shorts.  You see Pearl in Mei’s desk and there’s…a Burrow bunny.

Collins: “Yeah.  And then we also obviously have, as we always do, a nod to the next film up…Obviously, ours is a nod to Lightyear, which is coming up, and if you look carefully, you can actually see that one on Miriam’s skateboard.  So yeah, they’re all in there.  You just
gotta look.”

Shi:  “But it never felt like, when we came up with it…it didn’t feel like a big deal.  It was funny, and it felt real.”

Cho:  “Well, it feels very timely, ’cause I think we are living in this cultural shift…where it has gone from being something to be embarrassed and ashamed of, to being really embraced.  I mean, there are graphic novels now that are all about it, and, my daughter is reading books, and it just feels like this whole new generation, for them it just is normal.  And so to write a film that reflects that–I love it.”

On what the audience can takeaway:

Shi:  “That was the goal for making the movie.  To make it for the 13-year-old me, who was like what’s happening to me?  No one’s telling me anything.

Collins:  “I think one of the worst things about going through some of this is how alone it makes you feel. Like, ’cause it feels so foreign, and so sudden, and so personal, and a little out of control.  You feel like you don’t quite understand your own behavior.  You know, you’re supposed to be the expert on yourself, and it feels very weird and you feel off-kilter.

“And so, hopefully, this movie will kind of dispel that, and be like, no, no, no, everybody’s feeling this way when they’re going through it.  Either they felt it before, they’re about to feel it, or they’re actively feeling it right now.  And it’s actually super normal.  It’s part of growing up, and it’s part of you becoming an adult.  All of these weird feelings are actually a huge evolutionary growth moment in your life, and it’s really okay.”

Cho:  “I think that stepping into a Pixar project, I did have this sense of This is someone’s collective generational memory right?  That is the way I’ve been touched by Pixar movies, and the way my kids are touched by them.

“And I think that the thing that I’m proudest of, is that we created, we hope, a film that makes anyone watching it, girl or not girl, kid or parent, feel seen and understood. For me, that was always the goal.  Fingers crossed, we landed it.” 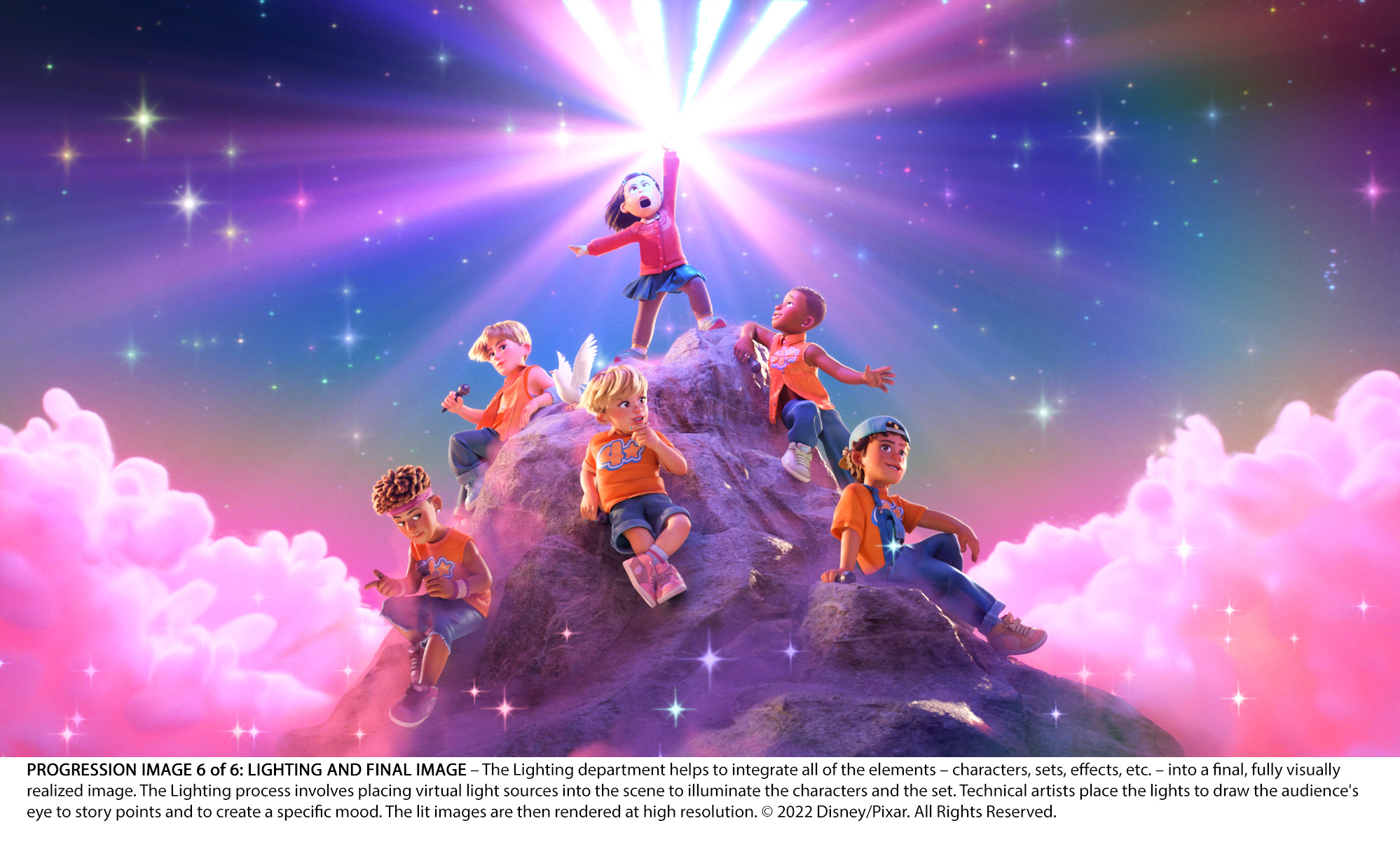 In case you missed it, here’s the trailer for Turning Red: