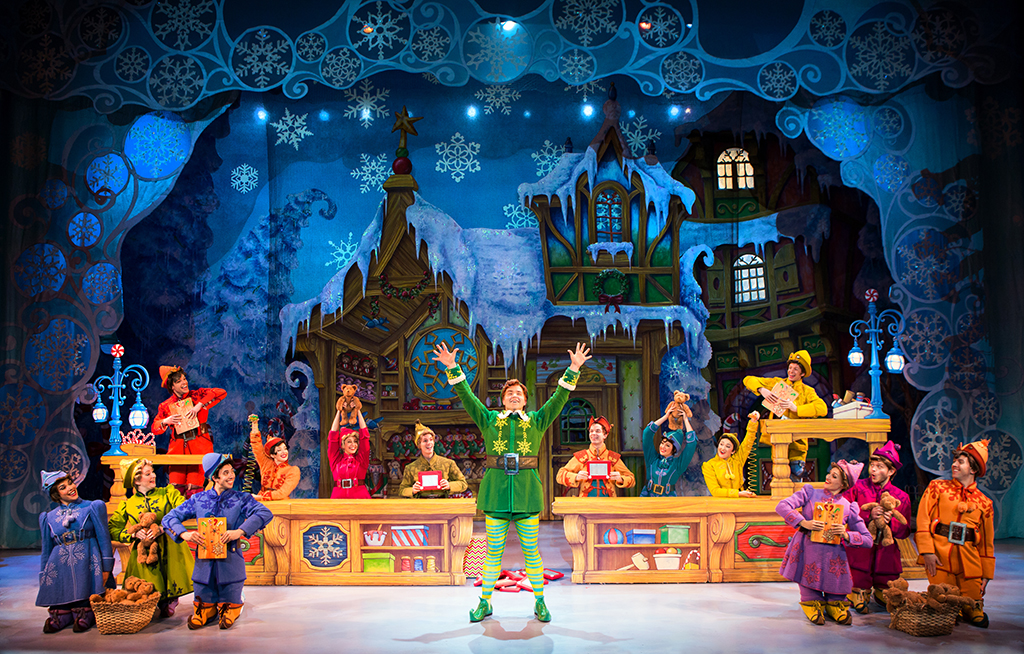 The wildly successful holiday comedy, Elf, has made its way to the Broadway stage and now to its Orange County premiere at Segerstrom Center for the Arts in Costa Mesa.  This now modern day Christmas classic has been adapted to the musical stage front from the cherished 2003 Will Ferrell film. ELF THE MUSICAL features a brand new line-up of flashy, cheerful upbeat melodies and remains as charming as the original movie filling the hearts of new audiences with holiday spirit. This new on-stage production will leave audiences all warm and tingly inside as ELF THE MUSICAL keeps the magic of the original while adding memorable onstage performances and reminding those that have forgotten, Christmas can bring love and joy to one and all.

Including many new songs from Tony Award nominees Matthew Sklar and Chad Beguelin (The Wedding Singer), director Sam Scalamoni has staged a fun-filled ‘laughfest’ with some fantastic comedic performances.  Holding the intension span even of the youngest of crowds, ELF THE MUSICAL keeps a high energy flow from start to finish keeping children at bay while still never alienating its adult audience.  Keeping true to the movie, there is some over-the-kids heads adult oriented humor and it strays away from the squeamish over-the-top holiday musical production you may be worried about. I went in skeptical and apprehensive of what I may be in for, but ELF THE MUSICAL was able to prove my skepticism wrong.  Taking over the recent annual production for The Center, How the Grinch Stole Christmas is absent from this years lineup and instead, the light hearted now near holiday classic ELF has taken over Segerstrom.

ELF THE MUSICAL does take a little time to warm up to as one may be hoping for too much of the same performance as Will Ferrell delivered in the film.  Fortunately, SAM HARTLEY (Beauty and the Beast National Tour) plays a charming and charismatic Buddy the Elf who remains true to the role yet still makes it his own.  Hartley has golden comedic timing, and while his “SANNNTTTAAA!!!!” line was lacking, he still added something a little different.  Instead of playing ridiculously over-the-top, Hartley instead brings it down a notch basically grounding the character somewhat.  His vocal talents and onstage presence shine through the entire musical. In case your unfamiliar with the story, ELF is the comical yet unbelievable tale of a young orphan child who has grown up at the North Pole with elves unknowing of his true human decent. Buddy’s non-elf sized body and poor toy-making abilities cause him to face the truth. Coming to the realizations of his true history, Buddy learns of his human father and embarks on a journey to New York City.  In his effort to gain the love of his scrooge-like workaholic of a father, Buddy must bring the city to remember the true meaning of Christmas.

This NETworks Presentations, LLC production is a top notch production with wonderful actors, but expect quite a few differences from the film. At its core, the musical is very much the same of its film counterpart, but as always when it comes to stage productions, it will have its fair share of changes. Gone is the head elf and basically replaced by more interactions with Santa who is basically our MC for the evening. Introduction to Buddy’s family is somewhat different, the brother is more accepting, Buddy’s love interest is afraid to sing, and there is no shower scene… okay I get that may have not worked as well in this setting. Nonetheless, there are changes to make this work better for the stage. It will be good to be prepared for some story telling changes. The first third of the musical suffers from a lackluster group of songs that are more cheesy than magical, but Buddy’s step-mom and step-brothers relationship brings much of the shows charm. The two breakout songs are a duets by these two and by far the most memorable. The rest of the songs, besides the notable and climatic “A Christmas Song”, are rather forgettable but no doubt still fun.  I just wish there were some more powerful ballads to write home about.

After a strong ACT II, ELF THE MUSICAL still managed to choke me up and help me remember the magic of the holidays.  By finding the power of family, innocence and the simpleness of finding the joy in life can help turn around a number of “bah humbugs”.  The show is hysterical at times, entertaining its entirety and overall a happy-go-lucky production that is a perfect treat for this holiday season that is perfect for the entire family.

Elf is playing though 1/1/17. Tickets to ELF THE MUSICAL start at $29 and are available online at SCFTA.org.