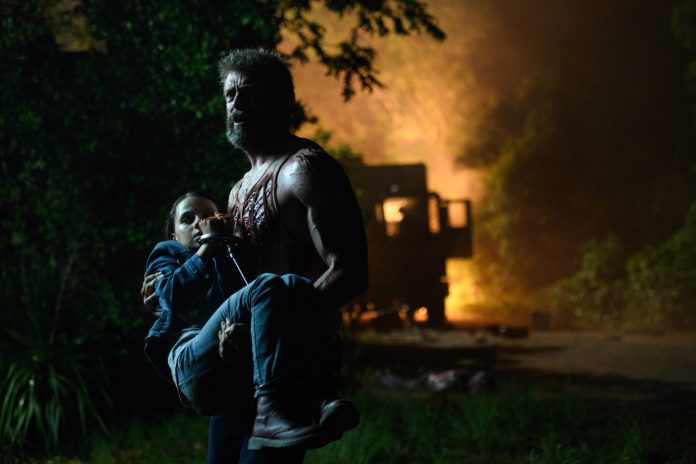 For the past seventeen years, Hugh Jackman has defined the role of Wolverine over nine separate films, the latest of which, Logan, will be his last time in the role. If this is truly the last time that Jackman dawns the claws, he couldn’t be going out on a higher note. Reuniting with The Wolverine director James Mangold, Logan is not only Jackman’s best performance as the titular mutant hero, but this will go down as one of the all time great comic book films. Mangold and Jackman have crafted a beautiful, somber, and unrelenting film that’s more akin to the westerns of George Stevens and John Ford than the bombastic superhero films that we get every summer. Instead, we’re given an intimate look at the twilight of Logan’s life, and what it means to be someone who has lived too long, and lost everyone he loved along the way.

The film finds Logan living on the Mexican border, alongside an ailing Professor Xavier. The two are in hiding from the world, a world that is much different than before. Mutants are all but extinct, with no new mutant births since the early 2000s. As strong as Logan tries to be, he is hiding from everyone that he’s sick as well. His regenerative powers are failing him, so he masks the pain with alcohol, all while he waits to finally die. But when a mysterious young girl ends up in Logan’s life, suddenly her fate is in her hands, and he’s thrust into a world he’s tried so hard to leave behind.

The opening moments of the film show that this is a vastly different Wolverine film than audiences are used to. James Mangold and Hugh Jackman clearly wanted to make sure that the character went out in a blaze of glory, and have pushed him to the limits, forgoing the PG-13 the series is known for, and going for a hard R rated film. Never before has the character’s ferocity, and the damage he can cause, been so intense. The world seems to have become incredibly unrelenting, so for us to see the world through Logan’s eyes now, you have to be able to show the dark and violent nature at its peak. It’s that core nature, that of a classic western that really defines this film. Having Logan as the drifter hiding from his past, only to have his past pushed back onto him, is a brilliant way to build this film. There’s no character that could better fit into this type of film, and it’s great to see Jackman and Mangold took the risk to take the character there.

Something that also makes this film so unique is how small it is, and how few characters there are. Of course, you have Hugh Jackman returning as Logan, but we also have the return of Patrick Stewart’s Charles Xavier, though this is a much different Xavier than before. His mental health is declining, so gone is the wise father figure we’re so used to. In his place is a man who has flashes of that, but is instead a broken, and often crazed, individual. To have Logan caring for his sick father, and trying to protect him from the world, flips their entire relationship on its head. Seeing Logan and Xavier together as a pair against the world is both beautiful and heartbreaking all at once. The dynamic that Stewart and Jackman share has always been fantastic, but this may be the best the two have ever been in the films. That’s a testament not only to their great acting talent, but to James Mangold as well, who clearly loves these characters and wants to push them to their brink.

But it’s really newcomer Dafne Keen that audiences are really going to love. Keen plays a young mutant girl named Laura Kinney, or as comic book fans know her as, X-23. Laura is part of an underground think tank that is breeding children to create new mutants. The group is run by Richard E. Grant’s Zander Rice, who believes they can control the mutant population. Keen’s Laura is a lovable, vulnerable, but rage filled character who no one will see coming. The fact that Keen sells the role so well with little dialogue shows how truly gifted she is an actress, and she steals much of the film. Her character also humanizes Logan in a way we haven’t seen in a long time: as a father figure. Their dynamic is so important to the film, and if Keen and Jackman didn’t have chemistry, the movie just wouldn’t work at all. It’s great seeing such a young actress with so much talent being showcased in the way she is here.

One thing that really makes Logan such a different film, and one that will standout for years to come, is how thoughtful it really is. The way it tackles Logan in his life now is something we really haven’t seen: broken, destitute, aging, and on the run. Jackman gives an incredibly powerful performance this time, and we really get the sense that the character has lived too long, and that he’s tired of the pain he feels. His body is failing him, and every time he gets hurt, it’s taking longer and longer to heal. It’s that weary and vulnerable nature that we really never see in films like this, and it really makes you feel closer to the character. If he’s as vulnerable as we are, it’s compelling, and you can relate, and the team behind this film have done a magnificent job giving us the finest look at Wolverine to date, while also being the most relatable.

Of course, a Wolverine film has to have action, and James Mangold brings his fantastic visual flair here, giving the film some outstanding action beats throughout. As he’s demonstrated with Copland, 3:10 to Yuma, and The Wolverine before this, Mangold can bring a ferocity to his action that feels real, intense, and is often very bloody. With the R rating fully in place, Mangold really takes the time to make sure we feel every slash of Logan’s claws, making it feel real. The carnage that Logan and X-23 leave in their wake is massive, with their first fight together at Logan’s hideout being one of the film’s biggest standouts. Mangold has a magnificent eye for action, and he successfully blends the gritty nature of the film with the more outlandish superhero side of it all, crafting something we really haven’t seen before in a comic book film.

Logan successfully subverts the comic book genre in a way we’ve never seen. The film gives us a more thoughtful look at life, loss, and growing old, while still offering the fantastic action pieces that audiences have come to expect. But it’s really the fantastic performances from the entire cast, especially the main trio of Jackman, Stewart, and Keen, that makes the movie worth watching. This is not only the best comic book film that 20th Century Fox has ever produced, but this is one of the best comic book films we’ve gotten to date, and may rank as the best Marvel film not produced by Marvel Studios. Jackman and Mangold have poured their all into this film, crafting something truly special and memorable. Hugh Jackman will forever be associated with the role of Wolverine, and if this is truly his last go around as the character, he couldn’t have gone out a better way.