It’s a Disneyland Resort tradition, and “Pumpkin King” Brian D. Sandahl, Senior Designer for Disney Entertainment Creative Development, has a wild and wacky new design for this year’s gingerbread house, the holiday centerpiece on the table in the ballroom of the Haunted Mansion Holiday in Disneyland park.

Of course, it’s not just any holiday, but one inspired by Jack Skellington and the animated film, “Tim Burton’s Nightmare Before Christmas,” so there are no reds and greens. So there’s a little bit of Halloween and a little bit of Christmas all rolled into one with orange berries, black pine garland, and garishly bright colors.

“Imagine if Jack Skellington had landed on the Haunted Mansion and decorated it with his vision of Halloween and Christmas,” says Brian. 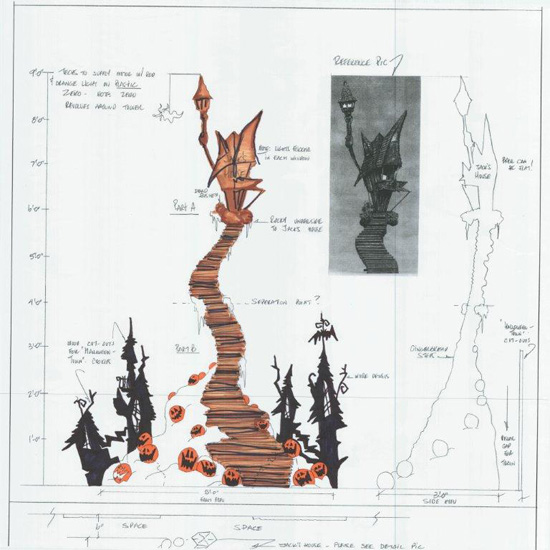 Now in its 12th year in the Haunted Mansion, this year’s gingerbread house perches on a skinny mountain, and it’s tall and spindly, just like Jack. At nine feet, it’s one of the tallest, according to Brian.

“Jack’s house, candles eerily flickering in the windows, is perched atop a steep, snow-covered peak, with gingerbread steps to his door,” he explains. “Along the way, there are lighted pumpkins in the ‘snowy’ cliffs.” 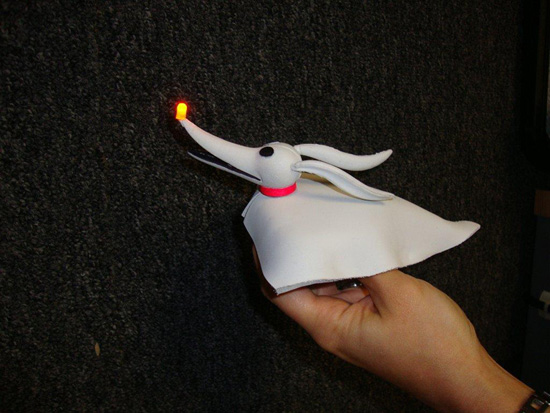 Those snowy cliffs are covered with pounds and pounds of sweet fondant, a simple sugar-water-cream of tartar mixture that is pliable (and edible). Jack’s pet ghost dog Zero is also covered in fondant, with a small glowing nose that looks like a jack-o-lantern as he flies in circles around the top tower.

It’s these moving pieces and parts that Brian loves best. Along with a flying Zero, there’s a classic Christmas train – but this one is the “terror train” from the movie that travels on a “ghost track” around the gingerbread house, with an engine, a coal car, a flatbed car with an enormous cupcake with candles, and a caboose.

“You’ll see the train, but it will appear as a ghost train – you can see through it,” says Brian. “As the train travels its creepy course, the ‘ghost lady’ at the right end of the ballroom table blows out the candles on the cupcake.”

Brian gets the fun started, then adds animation and lighting with a talented technical team. Meanwhile, Pastry Chef Jean-Marc Viallet and his bakers at the Disneyland Bakery are working on the exterior’s sweet touches with gingerbread, frosting, candies and fondant.

Opening day is September 14! We plan on several trips through the attraction to see all the holiday touches.

Socalthrills Staff - January 20, 2023
To commemorate the 100th anniversary of Disney (Disney100), Post Consumer Brands is participating in the Disney 100 Years of Wonder celebration with the launch...