Let the game begin. CLUE marks not only the West Coast premiere of the madcap murder mystery but also the 2021-2022 season debut of La Mirada Theatre for the Performing Arts. A splendid start of a suspense comedy based on the 1985 Paramount Pictures film which is also based on the Hasbro board game of the same name.

The production boasts a stellar cast and crew that includes Broadway director Casey Hushion (Mean Girls, Aladdin, The Prom, Eld, In the Heights, and CLUE at Paper Mill Playhouse), playwright Sandy Rustin (Disney Theatricals and stage adaptation of the hit film Mystic Pizza), and Jeff Skowron (How the Grinch Stole Christmas, The Lion King, Beauty and the Beast, and A Gentleman’s Guide to Love and Murder) as Wadsworth the butler.

CLUE for the most part follows the story layout of the 1985 film version that starred Tim Curry and Christopher Lloyd. With some tweaks to accommodate a live staged performance. The stunning design team placed the Boddy Manor lobby as the main set piece that anchors the smaller scenes together to create the illusion of a large mansion on stage. The dining hall, kitchen, library, and billiard room make their appearances just as important as living characters themselves. This includes lightning flashes thru the windows and hanging chandeliers.

Each cast member is no stranger to the stage as all bring out their top professionalism to the audience. Everyone pulls their weight in bringing their game characters to life. Jeff Skowron as Wadsworth the butler shines after playing another servant-type character of Zazu from The Lion King with the class of A Gentleman’s Guide to Love and Murder. Heather Ayers as “Mrs. White”, Mary Birdsong as “Mrs. Peacock”, Sarah Hollis as “Miss Scarlet”, and Cassie Simone as “Yvette” felt familiar and individually recognizable as their movie character counterparts.

But still able to place their own unique stamp. John Shartzer steals the show near the end full of energy as “Mr. Green”. There’s a delightful moment when the characters split up in teams of two to search the manor that evokes an appropriate and fun Scooby-Doo style choreography whilst opening and closing doors and navigating the hallways. At times feeling like a musical number is just about to burst at the seams. You also couldn’t ask for a better way to end the show, but playwright Sandy Rustin did just that.

With the praise of the engaging acting, staging, and set design, there was something noticeable about the ensemble cast that didn’t quite feel like everything gelled together. Harrison White as “Colonel Mustard” played off more like a performance fit for a musical rather than comedy mystery. But more importantly due to current health restrictions, not sure how well everyone played off each other. There was a sense of a slow pace and delivery that may be detected within the first few minutes. But you get used to this style.

A wild guess to assume rehearsals may have been socially distant to keep everyone as safe as possible. It’s like when a voice actor is in a sound booth recording their lines separately from other actors. And then later the different performances are edited together. Slightly distracting, but still enjoyable. Any theater lover of murder mystery and suspense comedy with the likes of Arsenic and Old Lace, then you won’t want to miss CLUE – A New Comedy. 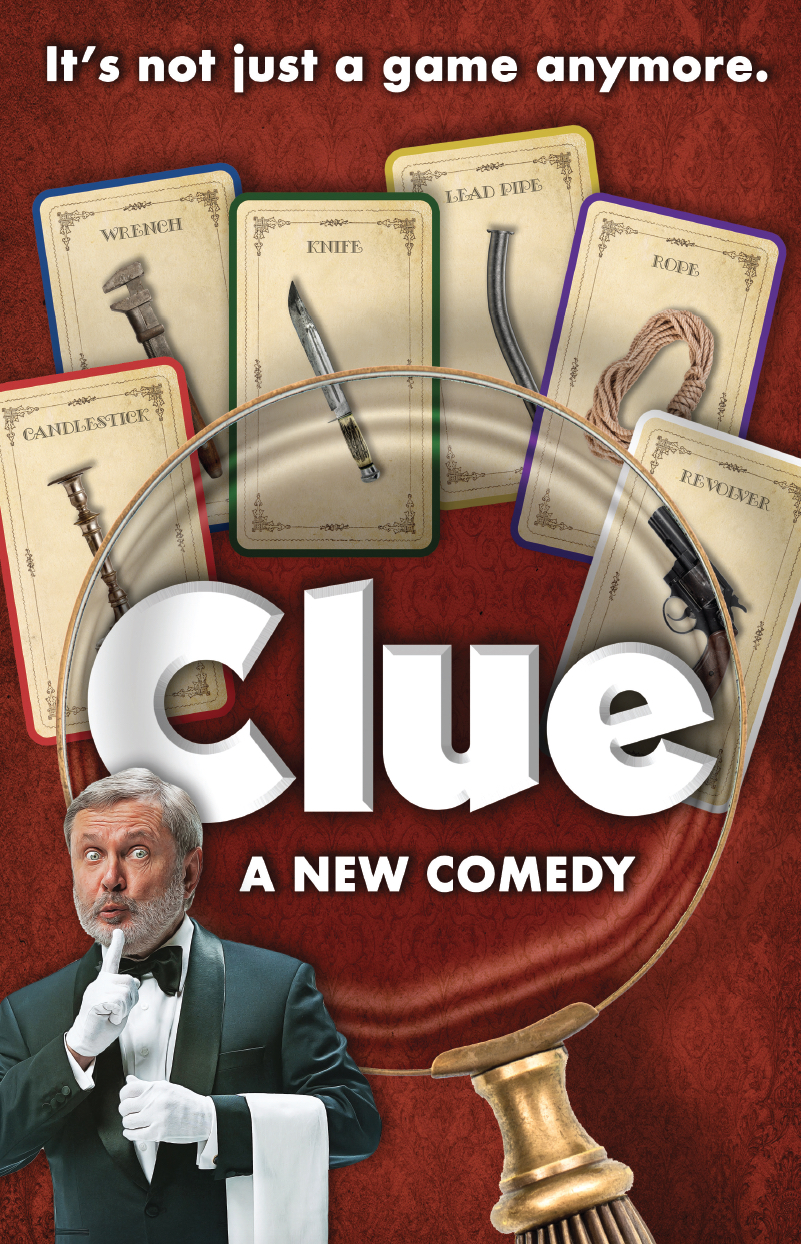 So what are you waiting for? Go get a CLUE.