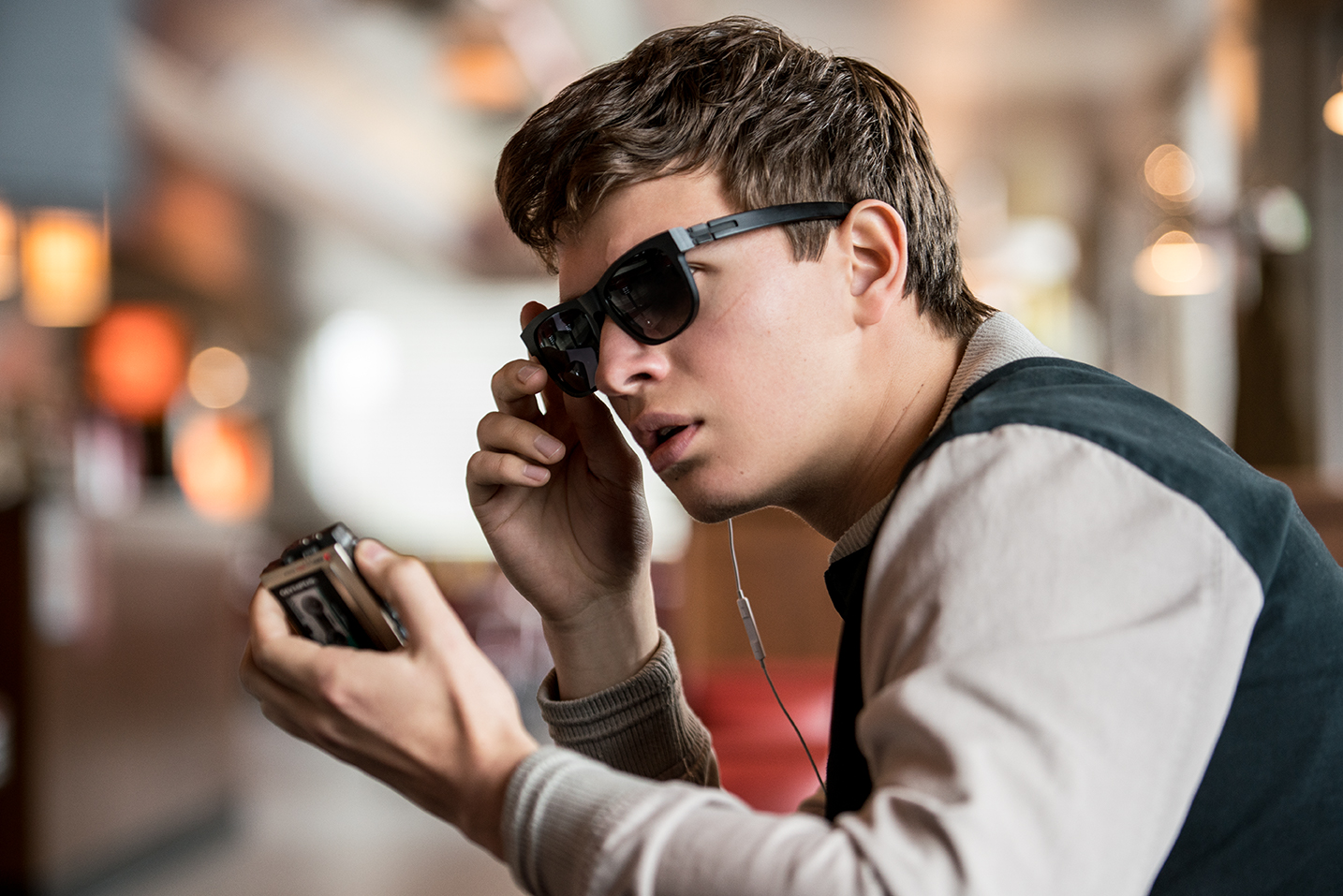 Bullets. Blood. Crime. Car Chases. Romance. Music. Those are the things that really drive Edgar Wright’s newest film, Baby Driver, a magnificent punk rock musical fantasy set in the seedy underbelly of Atlanta, Georgia. A throwback to cinema’s older crime thrillers, Edgar Wright has crafted a film that quite unlike anything you’ve ever seen, while still feeling familiar. But as one can expect from an Edgar Wright film, nothing is quite as it seems, making the film unpredictable, exciting, fresh, and fun.

Ansel Elgort plays Baby, a getaway driver with a particular set of driving skills that makes him the best at what he does. Working for a Kingpin only known as Doc (Kevin Spacey), Baby drives whenever Doc asks, but the life of crime is starting to wear down on him. When Baby meets the girl of his dreams, Debora (Lily James), he sees it as a chance to turn his back on his life of crime, go straight, and drive off into the sunset with her. The only question is, will his life of crime let him go without a fight, or is Baby in too deep? With a heart of gold and nothing to lose, Baby sets out to break free of Doc and his gang, but nothing is ever as easy as it seems, and the past is never as easy to turn your back on as one might hope.

While crime films are dime a dozen, Edgar Wright made sure that Baby Driver is distinguishable from the pack in just about every way. The film is more of a fairy tale/fantasy tale set in the underworld of Atlanta, giving it an almost otherworldly vibe. It looks like our world, but it doesn’t quite feel like our world, which gives the movie credence in many of its most outlandish moments. That heightened reality gives the world its own rules, so as over the top or exaggerated as something may seem, it works here. That also makes the way that music is woven into the film that much more incredible, as many of the scenes are set to the music that Baby is listening to. So every beat is a gun shot, an edit, or an action of some sort that inline with the music. It’s one of the most musically inclined films ever made, with every scene hinging on how it works with the song at hand, making it as much a musical as it is a crime drama.

The above plays into the fairy tale aspect of the film as well, which faces its hero at improbable odds, only for the hope of a happy ending. Baby is the prince, Deborah his princess, with Doc as the all-knowing Wizard who may not be all he seems, and Doc’s crew members are the goblins that Baby must face. It’s almost incredibly how tightly woven this story is into the fantasy genre, making it all the more impressive that Wright was able to pull it off with such precision. This fantasy world is Wright’s to play in, and he’s clearly having a blast creating this heightened version of our every day world, and opening it up in the way he has. This is a fantasy/adventure/musical like you’ve never seen before, and Wright knows that, and he’s intent on delivering in spades.

It also helps that Baby Driver has what may be one of the most likable casts in any film in some time. Ansel Elgort absolutely crushes his role of Baby, proving that he’s leading man material, and a great actor to boot. While many will recognize him from The Fault in Our Stars, where he was quite good, this film really pushes him in a new way, giving him the chance to really shine. He’s a man of few words, making him a bit more Clint Eastwood than the John Wayne, but rightfully so. It gives Elgort the chance to really show how he can act with little dialogue, using his body language and facial ticks to really make us get behind Baby, and proving to the audience he’s got a heart of gold. His relationship with Debora, played wonderfully by Lily James, feels natural, playful, and sweet. You’re rooting for these two to get together, with Baby saving Debora from the clutches of her diner life, and Debora freeing Baby from his life as the driver. The two just have a very real, natural chemistry, and they’re a big key to this film’s success.

Kevin Spacey is, unsurprisingly, a scene stealer throughout as Doc, the no-nonsense Kingpin who controls Baby, and all aspects of his operation. It’s a really great performance, and you can’t help but like Doc, even though he’s trapped Baby in this world. But the cast of characters around Doc are really something special as well. Jon Hamm, Eiza González, Jamie Foxx, Jon Bernthal, and Flea all play some crazy, over the top, sleazy villains who all have their own motives throughout, making each a wildcard. Foxx and Hamm especially get a lot of time to shine, with their characters of Bats and Buddy being the two who push Baby the most in the film. Once upon a time, Hamm would have been a leading man, but honestly, it’s almost better that he’s fallen into the world of the character actor. It’s given him a chance to really stand out and steal the films he’s in, and Wright gives him a lot to work with here, giving him one of the most memorable characters in the film.

Every bit of Baby Driver feels fresh and new, and that even comes down to the action. As mentioned before, the film is driven by its soundtrack, which gives the action scenes a whole different feel than anything you’ve quite seen before. The way the music is intercut with the action beats is just incredible, and Wright has crafted some truly fun and inventive set pieces to really let this film soar to new heights. Each frame feels like a shot out of a musical, and the scenes are perfectly timed and choreographed, giving the audience something unique every time. The music also really shapes the scenes in the way that the tension builds, with a song called “Intermission”, by Blur, being one of the most exciting uses of music in the entire film. The way it’s used to escalate the scene is absolutely enthralling, making the audience feel anxious, unsettled, but excited all at once. It’s quite the hat trick, but Wright pulls it off without a hitch.

Baby Driver is, by no exaggeration, unlike like anything you’ve seen before, and that’s what makes it such an incredible experience. Packed with action, suspense, a magnificent cast, and a helluva soundtrack, Baby Driver is truly fantastic. In a year full of disappointing films, Edgar Wright has delivered not only one of the best films, but he’s given audiences one of the most original and enduring as well. Movies like this remind moviegoers of the magic and power of cinema, sweeping them away into a fantasy world full of heroes and villains, taking them on an adventure they won’t forget. There’s no doubt that Baby Driver will be one of the most talked about films by the year’s end, and rightfully so. This is a one of a kind film that will stay with you long after you’ve walked out of the theater.