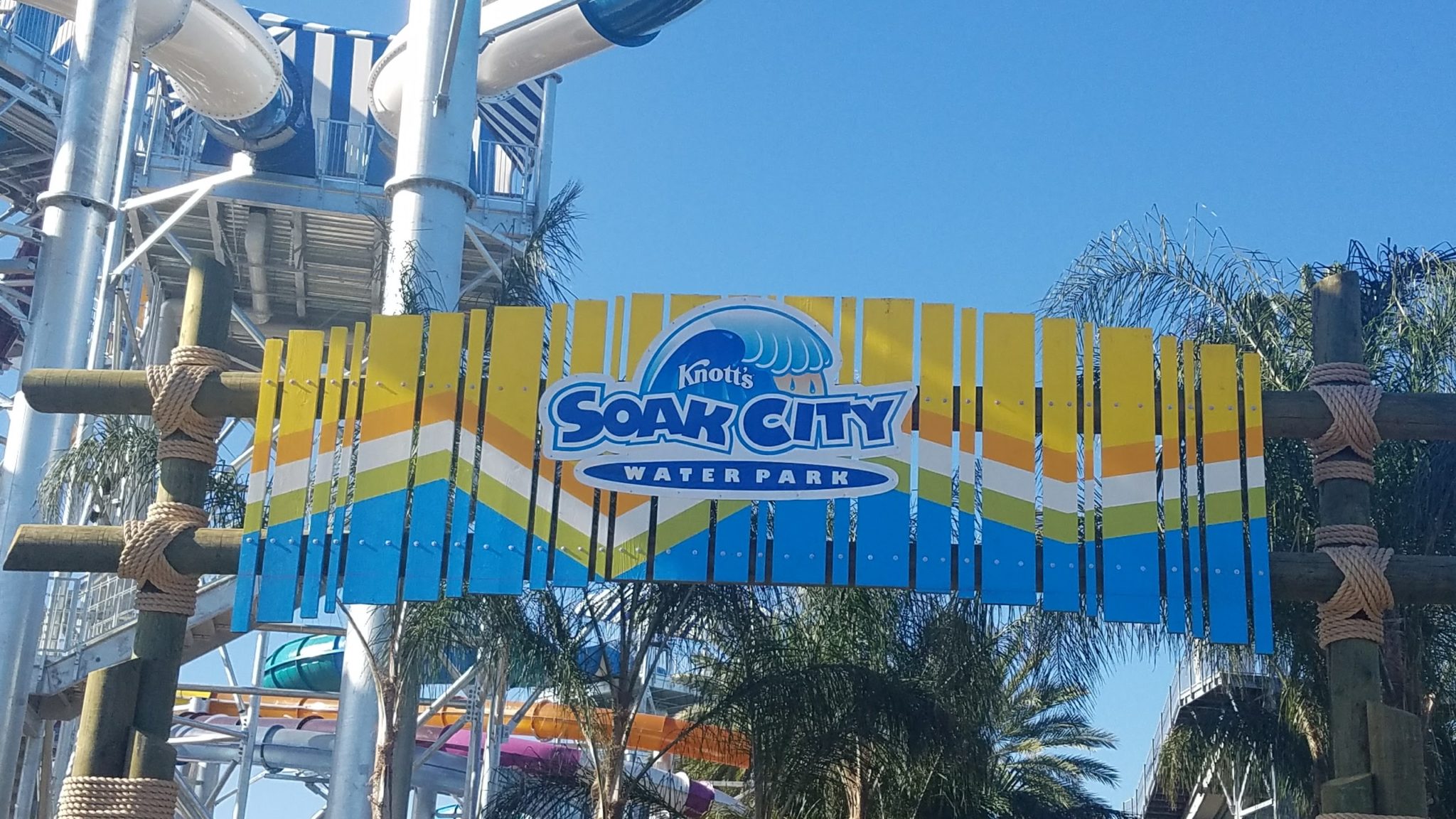 With the summer theme park season now in full swing, Knott’s Berry Farm has raised the ante when it comes to local water parks. Knott’s Soak City has just opened the largest expansion in its history. During this year’s Knott’s Soak City expansion project, the waterpark underwent a 2-acre expansion and two new ride towers were installed for the 2017 summer season. Knott’s Soak City is a seasonal park open from May 20 through September 10. The new expansion features seven new slides on the new Shore Break and The Wedge towers. Knott’s also fully remodeled their main dining facility, Longboard’s Grill, and added numerous semi-private cabanas.

We were fortunate enough to be invited to the grand opening of the new expansion. After attending a short media preview the Week before, I was excited to see the final touches of the new expansion and to get to ride the new slides for myself. I also brought the harshest critic in my family, my 12-year old daughter, for a different perspective.

After you purchase your tickets you must go through a security check point. They had four metal detectors and plenty of security staff when we arrived. When you first enter the waterpark there is a fantastic new fountain featuring a surfer riding the waves. Dressing areas and lockers are located behind the fountain before you enter the main park area. There is also a merchandise location just to the right of the entrance in case you need sunscreen, a hat, a towel, or even goggles. You can also pick up your Soak City themed merchandise here on the way out.

After a brief ribbon cutting ceremony we were ushered in to the new expansion area with the sound of a steel drum band playing in the background. We headed straight to the Shore Break tower which is situated where the Pacific Spin slide was formerly located. Shore Break has four Aqua Launch Chamber slides and two dueling tube slides attached at various levels on the tower. We headed to the top of the almost six story high tower to try the Aqua launch slides first. If you have never been on an Agua Launch slide before, they place you in a vertical plastic tube with a translucent floor for you to stand on, and after the tube has been secured and a brief countdown, the floor is removed and you slide down the vertical shaft on a high-speed free-fall down through a series of drops and turns. When you reach the bottom you just climb out of the narrow flume that collects you. This slide is a must do! To ride on the dueling slides that are attached to Shore Break tower you must carry a tandem, or single rider, inner tube up with you to the launch platform. There was no one at the entrance to the queue to inform us but I observed others carrying tubes up so I figured we should as well. When you reach the launch platform you are briefly instructed on the safety procedures and you enter the tube to begin the 20 second journey to the bottom. If you choose a tandem tube, the larger person in your party will enter the load area first. The tube for this ride is fully enclosed until you reach the bottom and there are several sharp turns and drops along the way. Both my daughter, and I, had a blast on the new tube slides and we highly recommend trying both slide types on the new shore break tower. By the time we had completed our rides on the Shore Break tower the park was now open for regular guests. The park filled up FAST! I am not sure of the attendance figures and capacity is for Soak City, but they had to be close to that number by the time we left for the day. The only reason I mention that is when we finished at Shore Break we headed to the brand-new family raft ride called The Wedge. During the media preview I was able to check out the new slide and watch as some of the life guards tested the new slide. The Wedge is a large open tube type slide using 8 man rafts to traverse the 6 turns before reaching the bottom. When my daughter and I entered the queue, we were at the bottom of the four-story tower. After waiting for close to 20 minutes we had just made it to the bottom steps of the tower. It was obvious at that point that the wait was going to be over 60 minutes, so we decided to try out the many new refurbished areas of the park. The Wedge appears to be very slow loading and many times while waiting we observed rafts going down with only two people which would cause the wait to be even longer. If you decide to visit Knott’s Soak City I would make The Wedge your second stop, after scoping out your covered spot to store your stuff for the day. Along with the 2-acre expansion, Knott’s Soak City refurbished all of their existing rides and ride towers. With a fresh new sliding surface and bright colored paint schemes, the other slides seemed to be in tip top shape. Many of the slides require either a mat or a tube to ride on them so be sure to carry those with you as you climb the towers. Each of the slides were exciting with varying levels of intensity and you can’t go wrong on which you choose. Just observe the length of each line if you want to maximize that number of slides you go on during your visit. After sliding we checked out the newly refurbished Beach House, which is an elaborate splash zone play area. Three huge buckets of water, each with close to 500 gallons, continuously fill eventually dumping their contents at random intervals on the guests below. There was a plethora of water cannons that could be manipulated to squirt unsuspecting park goers as well as two smaller water slides attached to the Beach House tower. This was a great area to go and have a little fun without having to wait in a long line to enjoy the day.

Next, we headed to the Sunset River which is a 1,780ft lazy river that dissects the park in the middle. Since the park was extremely crowded, there was a long wait to get an inner tube to enjoy the Sunset River. The Sunset River has two zero-entry access points. I would suggest the one that is located between the new expansion area and Longboard’s Grill since this is the area that most people seemed to be exiting from, which allowed us to get an inner tube in a shorter period of time. The Sunset River was enjoyable and moves at a nice pace. There are several foot-bridges that go over the river and one solitary bucket along the route that drips water onto your heads as you pass underneath. My only complaint about the Sunset River would be that it needs some interactive water nozzles or buckets along the route to help cool the upper portion of your body that is not in the water.

Let’s talk briefly about your eating choices at Knott’s Soak City. Knott’s has completely refurbished the Longboard’s Grill and added a shaded dining area outside. By 11:30 in the morning the line to get food at Longboard’s was close to an hour long. I don’t know if it was opening day jitters or if it is a design flaw but the service was slow. The food unfortunately was not any better. Granted we only received two different meals, what we did receive was not very appetizing. My daughter got the chicken strips, which was a good-sized portion but cold, while I chose the cheeseburger. Both meals were underwhelming. I will not do a full review on the food at this time because I am hoping that because it was opening day for the season that they were unprepared. You can also buy other fast food type items at Surf Daddy’s or Pizza at Portside Pizza. There also three new Coca-Cola Refresh stations located throughout the waterpark. Prices were comparable to what you would find at any theme park. The one thing that may have impressed me the most is the new landscaping and themed entrance to the newly expanded waterpark. Although in general Knott’s Soak City does not have a central theme that flows throughout the park, the landscaped areas were fresh and appealing. The walkways have been reworked and a new sign has been installed at the parking lot entrance. The new cabanas are also a plus. They seem to be a little out of my price range, $199-$350, but some of them do included beverage and food service. Cabana rentals are available where you buy your admission.

Overall, I was very pleased with our time at Knott’s Soak City. The slides were exciting and there were a wide variety of thrill levels to choose from. The entire 15-acre site was well groomed and I could see that the majority of guests were having a great time. It is hard for me to equate the value of admission to the amount of attractions and slides that we were able to enjoy since my tickets were comped for the day, but the pricing does seem to be fair for the amount of attractions that are available. If you are a waterpark fan I would highly recommend that you visit Knott’s Soak City, I don’t think you will be disappointed.